Wildfires in Greece: Forest fires wreaking havoc in Greece, many cities in danger, half the island in the grip 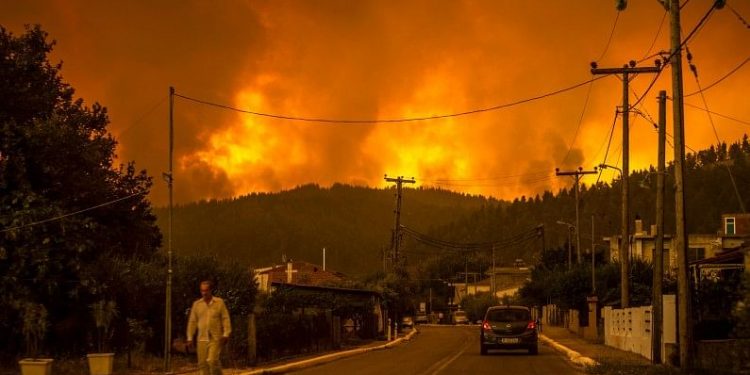 Ancient Olympia, Phokida in Greece’s southern Peloponnese peninsula, and central Greece, north of Athens, have also caught fire. The fire at ancient Olympia has moved away from the ancient site, but is now moving east.

The fire in the forests of Greece is getting worse. AFP

Wildfires in Greece: On Saturday in Greece, there was a lot of devastation in the forests at three different places. Due to forest fires in one place, cities are under threat and the fire has reached the country’s second largest island, Evia. Due to this, half of the island has been isolated.

A Coast Guard spokeswoman told the AP that a total of ten ships, including two Coast Guard ships, stood ready to evacuate more residents and tourists if needed, at Pefki, a seaside area near the northern tip of Evia. In northern Ivia, firefighters spent the night trying to save Istia, a city of 7,000 and several villages. They used bulldozers to make way through the dense forests. On Friday night, around 1,400 people were evacuated from seaside villages and islands.

Ancient Olympia, Phocida in Greece’s southern Peloponnese peninsula, and central Greece north of Athens have also been raging. The fire at ancient Olympia has moved away from the ancient site, but is moving east, threatening villages. There is still a fire on Mount Parnitha, north of Athens, which flares up every now and then. However, a fire service spokesman said that efforts to extinguish it seem to be successful. Civil Defense Deputy Minister Nikos Hadalias said firefighters were hopeful they would get the fire under control soon.

A firefighter was killed on Friday due to extremely hot winds and at least 20 people had to be hospitalized in the past week. The temperature here has reached 45 degree Celsius. Prime Minister Kiriakos Mitsotakis visited the headquarters of the fire department in Athens on Saturday and expressed grief over the death of the firefighter. A local official in the Mani region of the southern Peloponnese has estimated that about 70 percent of the area has been destroyed by forest fires.

The investigation into the cause of the fire continues

Investigation is on to find out the cause of the fire. On Friday, three people were arrested in the Greater Athens area, central and southern Greece, on suspicion of intentional setting fire to two counts. A 47-year-old Greek man was arrested on Saturday afternoon in the Athens suburb of Petroupoli. Greek and European officials have blamed climate change for the widespread fires in forests from southern Europe to southern Italy and Turkey.

America’s big step to stop the increasing ‘occupation’ of Taliban, B-52 and AC-130 aircraft sent to Afghanistan, bombs raining from the sky