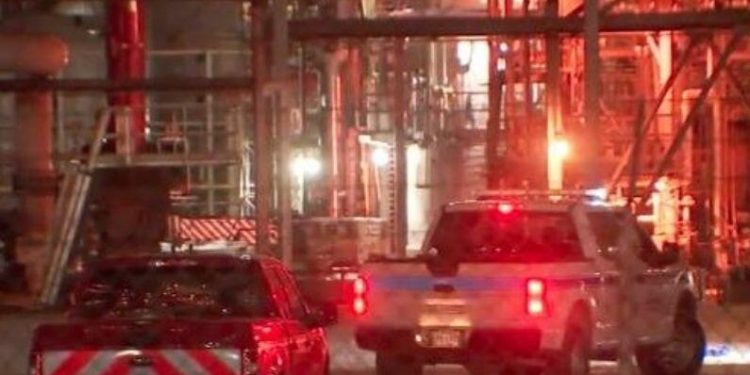 Chevalier Gray, a spokesman for the company’s LyondellBasell facility in Texas, said that at 7.35 p.m. there was a leak of acetic acid at the plant located on the La Porte campus.

Ambulance parked outside after chemical leak in plant

According to local time, two people died after a chemical leak on Tuesday evening from a plant in La Porte, Texas, USA, while dozens were injured. The officers provided this information. Chevalier Gray, a spokesman for the company’s LyondellBasell facility, said that at 7.35 pm there was a leak of acetic acid at the plant located on the La Porte campus. Officials of Channel Industries Mutual Aid and the city’s Disaster Response Force were present at the spot on Tuesday night.

Chevalier Gray said two people were seriously injured and four others suffered burns and were taken to hospital for treatment. The company said that it is working closely with officials of disaster response forces to keep track of the status of all employees. Gray said that the air inspection showed that there is nothing to worry about the surrounding areas. At the same time, the Harris County Fire Marshal’s Office later confirmed that dozens of people were also injured in this accident. Harris County Fire Marshal Laurie Christensen said at a news conference Tuesday night that one person was hospitalized and another was sent by ambulance.

Dozens of people were kept under observation

Five others are being treated on the spot, while dozens are being monitored for symptoms. These people are facing difficulty in breathing and swallowing. Laurie Christensen said that people usually feel that something is coming out as soon as they get information about the leaking incident. A leak can also happen when something has burst from above and the chemical starts leaking out. So once we start the investigation, we will be able to elaborate more specifically about this incident.

People have not been suggested to take protective measures

Harris County Judge Lynne Hidalgo issued a statement on Twitter, saying she was deeply saddened by the incident. Hidalgo tweeted, “Shocked to hear about the deaths of two people from the Lyondale Basel Company in La Porte. Our county and other rescue agencies are working to support other affected workers and verify that the leak is under control. Grateful to all the disaster rescuers. Other information about this incident was not immediately available. According to a statement issued by La Porte Emergency Services, the area is in Harris County, near the city of La Porte. No shelter or other protective measures are being suggested for the La Porte community at this time.