Ukraine: Rocket attack on Rashtrapati Bhavan, said Zelensky – hit the target, if Putin is not stopped, Europe will be destroyed 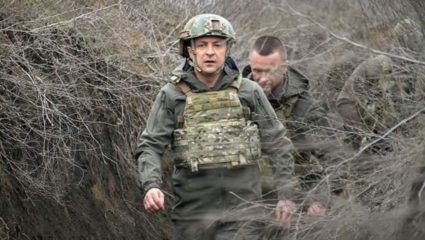 new Delhi. Where the tenth day of the Russian army’s attacks on Ukraine (Russia-Ukraine War) also begins today. Whereas yesterday, the ninth day of the war started with a news that shook the whole world as if it was shaken with fear. Yes, Russian forces have captured Ukraine’s largest nuclear plant.

At the same time, it was being claimed repeatedly that Russian President Vladimir Zelensky was trying his best to assassinate him. At the same time, a fragment of a rocket has been found dropped on the presidential residence of Ukraine. Which is being described as an attack on the President of Ukraine.

In this regard, President Vladimir Zelensky himself has commented on the rocket that fell outside his residence. He has said that, its target was missed this time… that is, once again Zelensky himself has told that an attempt has been made to kill him. Earlier also in a report, it was told that Zelensky was tried to be killed three times. But every time he somehow narrowly escaped. At the same time, Zelensky has appealed to European leaders to help stop Russia. Zelensky said, ‘If Russia is not stopped, then the whole of Europe will end.’

At the same time, Azarov, the former Prime Minister of Ukraine, has said that President Zelensky may be in one of the bunkers located in the center of Kyiv. During this, he also told that this bunker is so strong that even a nuclear attack on it will not affect it. On the other hand, Ukraine has also demanded the supply of heavy weapons from Germany. Yes, according to the agency, tanks, submarines and combat helicopters are also included. A spokesman for the German Defense Ministry said that many supplies are currently ready for shipment.

Here in the midst of the war with Ukraine, Russia has banned Facebook and Twitter. In this regard, the Putin administration has said that this ban has been imposed due to the discrimination in content publishing of Russian media.

There are also reports that Ukrainian President Volodymyr Zelensky will now hold a virtual meeting with US Democratic and Republican senators. According to the information, the meeting will be held at 4.30 pm today.

Tenants are paying extra and signing as much as longer tenancies, in line with a…

U.S. shares climbed on Tuesday, as Citigroup led a surge in financial institution shares after…

Aptus Value Housing Finance IPO open, weak response in gray market, but what is the opinion of experts regarding investment