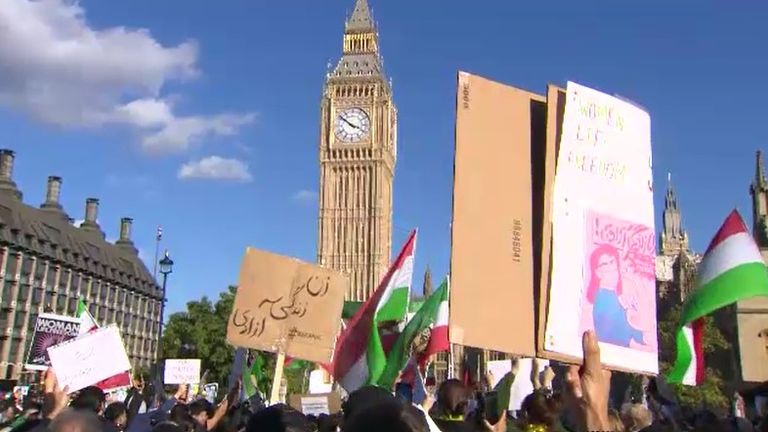 Thousands of demonstrators gathered in London to protest in opposition to the Iranian authorities’s crackdown on ladies and ladies who don’t adhere to the nation’s strict costume code.

Sisters Arzoo and Nina instructed Sky News they had been protesting to provide individuals in Iran a voice.

“We want to see the regime gone. We want freedom for Iran,” mentioned Arzoo.

Asked whether or not they believed change was doable, she replied: “Yes, we do. If individuals need to make a distinction, that is the one time and the final likelihood that we’ve got.

“A lot of celebrities and MPs are talking about it, so these protests are making a change.”

Protests have entered a fourth week after the demise of twenty-two year-old Mahsa Amini within the custody of Iran’s morality police.

Amini had been detained for alleged violations of the nation’s strict costume code.

More than 150 individuals have been killed in widespread unrest in Iran since mid-September, in response to Norway-based NGO Iran Human Rights.

“My hands are painted because there is blood on the streets. The Iranian regime is killing our children, they’re hitting their heads on the floor. The morality police are very dangerous,” she mentioned.

“We don’t want this kind of regime in Iran. We are going to have revolution.”

“We need all the help we can get to change the regime which has been adversely affecting people for over 40 years, so that we can get to restore Iran to what it should be.”

No matter the way you take a look at the numbers, “Halloween Ends” had a…

How does NASA’s Hubble Telescope work? Understand the ‘science’ behind amazing pictures of space?

Jerusalem violence turned into controversy rocket attacks, why are there clashes between Palestinian people and Israel?

In recent times, tensions between Israel and Palestine have increased significantly. On Monday, demonstrations took…

Tips for Indian traders whereas investing in US inventory market

By Akshaya Bhargava From Dalal Street to Wall Street, facilitated by expertise, Indian traders have…