Two ‘red asteroids’ outside the solar system knocked, scientists said – they should not be present in the asteroid belt 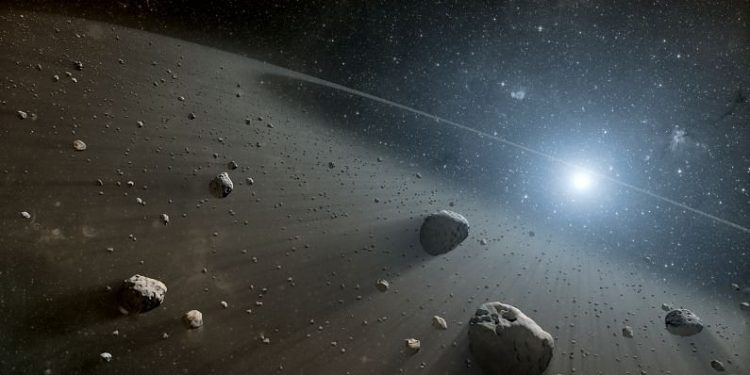 Scientists have discovered two huge rocks in the asteroid belt between the orbits of Jupiter and Mars. It is being said about them that these rocks should not have been there. These asteroids have been named 203 Pompeja and 269 Justitia. Looking at the pictures of both asteroids, it seems that they are like trans-Neptunian objects, which are found beyond the eighth planet of our Solar System. Complex organic matter is present on the surface of both asteroids and they are redder than other objects in the asteroid belt.

Experts say that they were formed near the planet Saturn during the formation of the solar system. But during the formation of planets, they slipped from the planet Saturn and reached near the asteroid belt. Japan’s space agency JAXA said that this discovery provides new evidence that fragments of a planet formed at the outer edge of the solar system moved into the asteroid belt within Jupiter’s orbit. According to JAXA, the 203 Pompeja measures 110 km in diameter, while the 269 Justitia measures 55 km in diameter. Experts say that 203 Pompeja is the only ‘very red’ asteroid out of 250 celestial objects larger than 70 miles.

The color of the asteroid was detected in this way

Both asteroids were discovered in the 19th century, but their color was detected through visible and near-infrared spectroscopic observations from the Infrared Telescope Facility (IRTF) in Hawaii and the Seoul National University Astronomical Observatory (SAO) in Korea. Was. Generally, objects in the inner solar system reflect more blue light because they do not have complex organic compounds such as carbon and methane. Objects in the outer solar system are red because they have many of these compounds.

Let us tell you that asteroids are rocks that revolve around the sun like a planet. But they are much smaller than the planets. Such clouds of gas and dust, which could not take the shape of a planet and were left behind, were transformed into these rocks i.e. asteroids. This is the reason that their shape is also not round like the planets. No two asteroids are alike. Most of the asteroids are found in the asteroid belt between Mars and Jupiter.

Also read: Jeff Bezos got a big blow! US government bid – Elon Musk’s SpaceX is right to be given the contract of ‘Moon Mission’