HomeWorldThe fire in Turkey's forests is spreading continuously, the flames reach the...
World

The fire in Turkey’s forests is spreading continuously, the flames reach the power plant, the worst situation in history 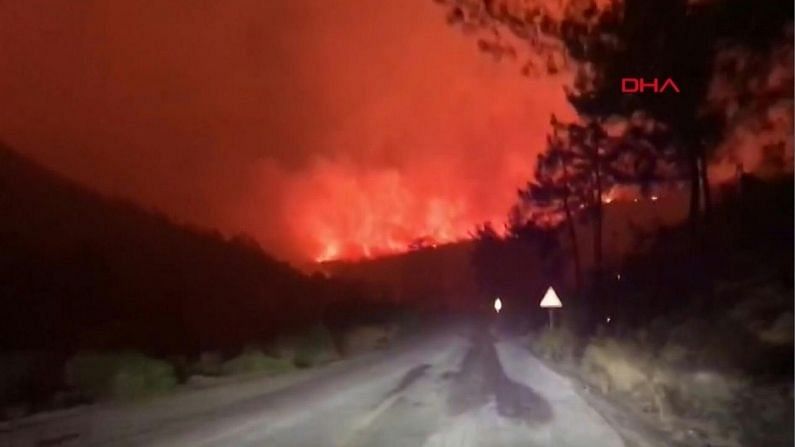 Turkey Forest Fire: Due to the fire in the forests of Turkey, the government is also being criticized a lot. Despite having a large forest area in the country, there is no fire fighting aircraft. Due to which it has become difficult to control the fire.

Forest Fire in Turkey: Instead of stopping the fire in the forests of Turkey, it is increasing rapidly. The situation has become so bad that now the fire has reached the premises of the coal-fired power plant, due to which the people around have to leave their homes (Turkey Forest Fire 2021). However, the fire was brought under control on Thursday. Haberturk TV reported that due to strong winds, flames reached the Kemerco power plant in Mugla province late Wednesday evening.

It was told in the news that after this the people of Oren had to leave the area. Naval ships have been deployed to help the people. Long queues of cars have formed on the exits from the area (Forest Fire in Turkey Today). Turkey’s forests have been on fire for nine days, and it is the deadliest in the history of recent decades. So far eight people have died in the fire while countless animals have lost their lives.

The fire continued to wreak havoc on Thursday in six areas of the coastal Mugla province, officials said. The fire also caused destruction in five districts of Antalya province and two areas of the province had to be evacuated on Wednesday (Turkey Forest Fire Cause). The state-run TRT broadcaster said precautionary measures were taken before the flames reached the Camarco power plant. The plant’s hydrogen tanks were evacuated and the personnel were evacuated.

Firefighters working to save the plant

Images broadcast on TV showed the main building of the plant being surrounded by several fire engines and water being poured to cool the site (Turkey Forest Fire Antalya). Firefighters were working for two days to save the plant from the fire. Apart from Turkey, a similar condition is present in Italy, Greece and Spain. Here too the forest fire has increased the temperature very much and people have to leave their homes on a large scale.

Computer Filters Noise to Make You a Better Listener