The ‘boat’ module of Russia which had made the ISS uncontrollable, now Astronauts got its ‘world tour’ done, watch video 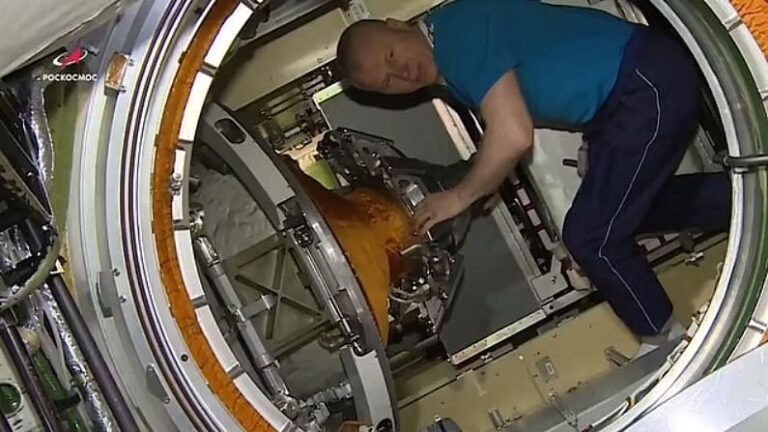 Russian cosmonauts Oleg Novitsky and Pyotr Dubrov have made the world a world tour of their new module yacht (Nauka Module).

Astronauts taking a tour of the yacht module

Russian cosmonauts stationed on the International Space Station (ISS) have released the first photo of their new module boat (Nauka Module). The module made headlines last week, when it inadvertently fired its thrusters after docking and threw the ISS out of control. Russian space officials said the crash was caused by a software glitch and possible lapses in the attention of scientists.

Vladimir Solovyov, a senior official at the Russian space agency Roscosmos and a former cosmonaut, said in a statement that an order to remove the module’s engines was in error due to a short-term software failure. Because of which this happened. Now that the immediate danger has passed. Russian astronauts Oleg Novitsky and Pyotr Dubrov have given the world a tour of the upgrade. It has crew quarters, galley and toilets as well as a new science facility, docking port and spacewalk airlock.

The tour began with the opening of the hatch, with the astronauts unlocking the door to a new section of the ISS. Then they reach the boat floating in a gravity-free environment from a large place. Here you can see countless wires and new mechanics attached to the modular walls. Oleg Nowitsky shared the video on Twitter and said that more tours will be conducted in the coming times. At present, this video of 2 minutes 9 seconds has been liked by thousands of people.

Pyotr Dubrov and I welcome everyone from our new module #Science!

We will conduct a more detailed tour soon. pic.twitter.com/4J5GoOjzJq

The yacht module docked on the ISS on 29 July

In Russian language yacht means science. It was sent to space on July 21 via a Russian Proton rocket. This rocket also reached space with a new European Robotic Arm or ERA. The 16-foot-long two-handed robotic arm can easily move outside the ISS. After spending eight days in space, the 43-foot-tall module without a crew was attached to the Russian segment of the ISS. This process of joining the ISS took place on 29 July. However, soon after the docking, the team realized the mess.

Also read: Sounds of great destruction! Greenland lost 850 million tonnes of ice in a day, so much water that big states like UP would be submerged

ALERT! ‘No number’ means trouble, do not receive such a call, otherwise there will be heavy loss