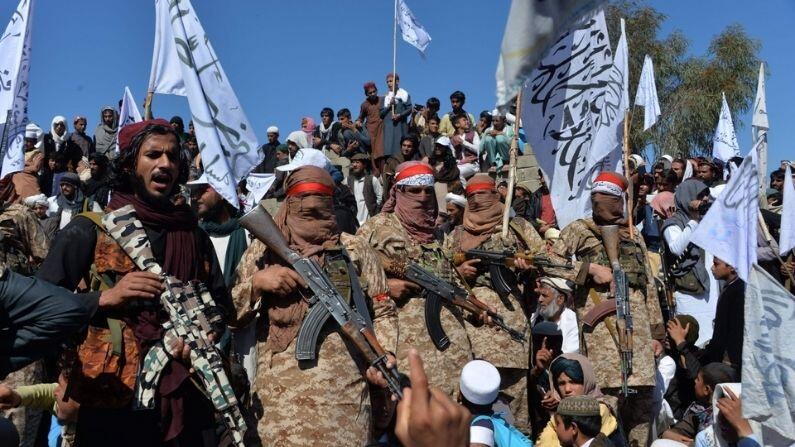 According to Tolo News, the people of Malistan district in Ghazni say that the Taliban have killed 43 civilians.

Taliban fighters with flags and weapons in hand (AFP)

The brutality of the Taliban continues since the withdrawal of foreign forces in Afghanistan. Once again the Taliban has shown its brutal form to the world. Earlier this month, 43 civilians and security force members were shot dead by the Taliban after an attack on the Malistan district in Afghanistan’s central province of Ghazni. The people living here have given information about this. However, the Taliban have vehemently denied these allegations against them.

According to Tolo News, Mina Naderi, a civil society activist from Ghazni, told a news conference in Kabul on Sunday that Taliban fighters committed war crimes after entering Malistan district and killed those civilians. who were not involved in the fight. Naderi read out a joint statement from the residents of Malistan. In which it was said that they attacked the houses of the people and looted their property and burnt the residential houses. They also ransacked and looted shops in the middle of Malistan district.

According to Tolo News, Haji Nadir said that his sons Ramzan Ali (29) and Ishaq Ali (31) were killed by the Taliban 10 days ago. They were not even government employees or members of the country’s security forces. Nadir said they were trying to leave Malistan with their families as fighting escalated in the area. The wives of those killed said that the Taliban blindfolded their husbands in front of their children. Took them to a mosque in the area and then fired them with bullets.

Ishaq Ali’s wife Jamal said, “We were on our way when the Taliban stopped us. Both were taken away by the Taliban and both were killed. Ramzan’s wife Zulekha said, he was taken out and killed a short distance away from his house. Tolo News reported that the dead had five children. Those who are currently in Kabul and the eldest of them is seven years old. Such incidents are continuously coming out from Afghanistan.

Those displaced after fighting in Malistan have also said that the Taliban collected food from people and issued a proclamation saying they would treat people, especially women, based on Islamic Emirate rules. Tolo News, citing figures, said that at least 3,000 people have been displaced from Malistan in the last 10 days following the Taliban attack.

Also read: How will peace be restored in Afghanistan and how will the war end? America told that this method is effective