Taliban captured Helmand TV station, America did tremendous airstrikes on the bases to push back 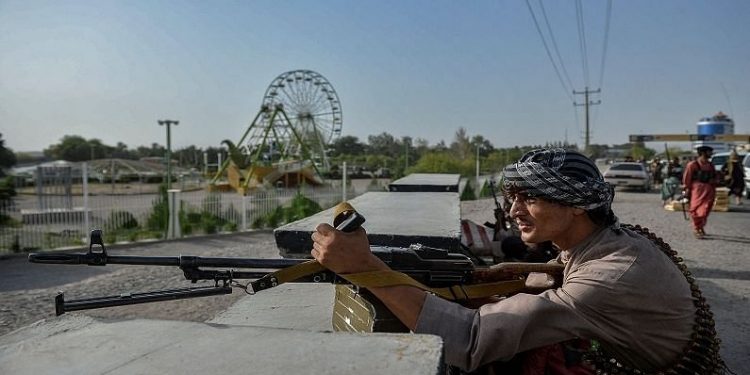 In the past 72 hours in Afghanistan, US airstrikes have targeted Taliban positions around the cities of Herat, Kandahar and Lashkar Gah.

A security guard stationed in Herat

The Taliban have captured a TV station in the strategic Helmand province of Afghanistan. A source from the TV and radio station informed CNN on Monday. Located in the city of Lashkar Gah, the capital of Helmand province, Helmand TV station was operated by Radio and Television Afghanistan. Local journalists of Lashkar Gah say that nothing is being broadcast on the station at this time. In a message to CNN, Taliban spokesman Zabiullah Mujahid said the organization had taken over the station.

A senior Afghan security official said on Monday that the incident comes at a time when the US has intensified airstrikes on several key provincial capitals in Afghanistan to stop the advance of Taliban fighters. The official said that in the past 72 hours, US airstrikes have targeted Taliban positions around the cities of Herat, Kandahar and Lashkar Gah. The official said that when the Taliban were trying to enter the city, they were attacked several times. These three cities are under threat from Taliban and the war is going on here.

Aid is being given to Afghan security forces through air strikes

US officials have recently confirmed that once again US airstrikes are being carried out in Afghanistan. On an average, there are five air strikes in a day. A US defense official said the airstrikes are currently the only military aid the US is providing to Afghan security forces. For the time being, there is still no possibility of back and forth of control over the ground. But as of Monday, the Taliban was controlling some of the southern outskirts of Kandahar. The Taliban attempted to advance into Herat near the Iran border, but was pushed back.