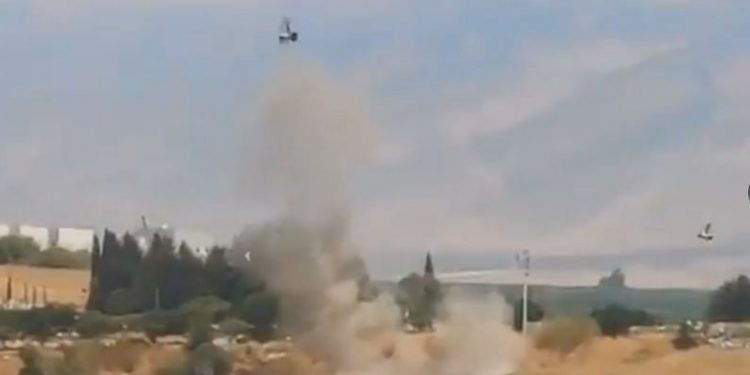 Israel: Israel has been attacked with rockets. These rockets were fired from the Lebanese side. In response, the army also fired artillery and opened fire. While a rocket was shot down by the Air Defense System Iron Dome.

Israel Rocket Attack: On Wednesday, Lebanon carried out rocket attacks on Israel, in response to which the army opened fire. However, there is no news of any damage so far. According to the information, danger sirens were sounded in the northern part of the country with a warning of a possible rocket attack. It is being told in television news that one rocket landed in open area and another was destroyed by Israel’s defense system ie ‘Iron Dome’.

It is being told that the army is also firing artillery in retaliation. Warnings were issued in Metula, on the border with Lebanon. There have been several such incidents in recent months (Israel Rocket Attack Alert). Palestinian groups based in Lebanon are believed to have fired, not Hezbollah. Hezbollah is considered the biggest threat to Israel. However, it is unlikely that this group could operate without Hezbollah’s permission.

one died in bus fire

On the other hand, a bus caught fire and its driver was killed by an explosion at the entry point of the military barracks at the western end of the Syrian capital Damascus. Plumes of black smoke covered the area. According to preliminary state media reports, the fire started after an explosion in the gas tank of a bus parked at the entry point of the military barracks near Koodsaya in western Damascus. Three other people also got burnt in this incident and were admitted to the hospital.

At the same time, state-run al-Ikhbariya TV called it a terrorist attack but did not give any information in this regard. Britain’s Syrian Human Rights Monitoring Centre, which oversees the war in government-held and rebel-held territory, said at least one person was killed and three were injured (Blast in Syria Bus). The bus was completely damaged in this incident. It is not yet clear how the explosion happened.