The government is under question regarding the slow pace of vaccination in Australia. This is the reason why Australian Prime Minister Scott Morrison has to apologize.

A video of the demonstration showed a crowd chanting ‘Freedom, Freedom’ and marching through the city’s central business district. New South Wales Police and Emergency Services Minister David Elliott criticized the protesters, telling reporters, “Such people will be responsible for prolonging the lockdown.”

3500 people took part in the demonstration

So far 50 people have been arrested in Sydney. In other cities like Melbourne, protesters also took to the streets. The exact number of protesters is not yet disclosed, but Elliot indicated that some 3,500 people took part in the mass protests. He said that today we saw 3500 selfish ‘fools’. The organizers of the protest called it a ‘freedom rally’ and publicized it on social media pages, AFP reported. 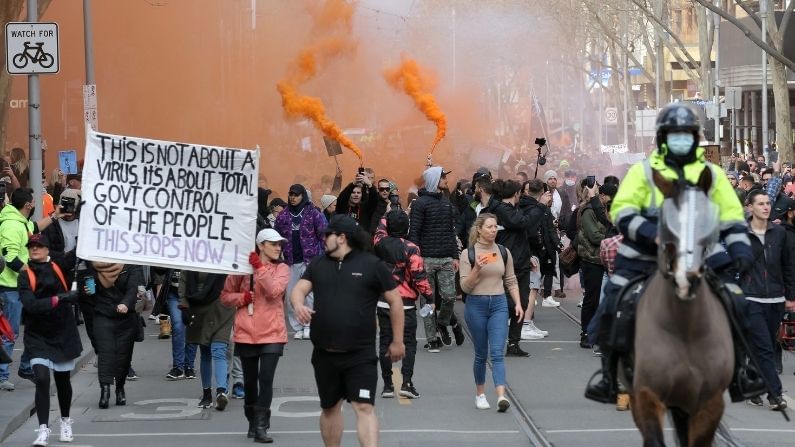 Cases rising due to slow vaccination

There is increasing public outrage over the Scott Morrison government’s handling of the pandemic. Most of the protesters were seen without masks and marched with signboards with slogans like ‘Wake up Australia’ and ‘Drain the Swamp’. Millions of Australians have been placed in lockdown due to the spread of the Delta variant. Also, due to the slow pace of vaccination, the number of cases has increased.

According to the Bloomberg Vaccine Tracker, Australia has given enough doses to only 21 per cent of its population. The country’s vaccination pace slowed further after a new advisory was issued last month recommending the AstraZeneca jab only for those aged 60 and over.

Also read: Strange campaign to increase vaccination in Pakistan, mobile sim of people without vaccination will be blocked

Shehnaz is a Corporate Communications Expert by profession and writer by Passion. She has experience of many years in the same. Her educational background in Mass communication has given her a broad base from which to approach many topics. She enjoys writing about Public relations, Corporate communications, travel, entrepreneurship, insurance, and finance among others.
Articles: 3698