Pakistan PM Imran Khan’s address, said – I will not allow my community to be slavery to anyone 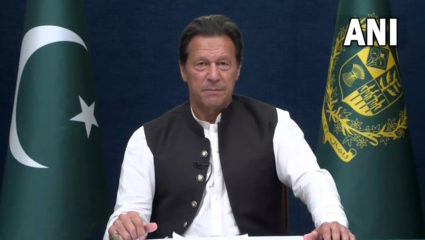 Islamabad. The going to the chair of Pakistani Prime Minister Imran Khan is believed to be fixed. They have effectively lost the majority in the lower house. In the midst of this political crisis, Imran addressed his country. He said, “I am lucky that God has given me everything – fame, wealth, everything. I don’t need anything today, he gave me everything for which I am very grateful. Pakistan is only 5 years older than me, I am from the first generation of the country to be born after independence.

Imran said, “As a kid, I remember Pakistan reaching the top. South Korea came to Pakistan to learn how we proceeded, the Malaysian prince attended school with me. The Middle East used to come to our universities. I have seen all this sinking, I have seen the disgrace of my country.”

#WATCH , Islamabad: In his address to the nation, Pakistan Prime Minister Imran Khan claims that a foreign nation sent a message to them (Pakistan) that Imran Khan needs to be removed else Pakistan will suffer consequences. pic.twitter.com/aTGUh9HqSe

Imran has claimed to be a foreign force to remove him from the post of PM. He said, “On March 8, we get a message from a foreign country giving an excuse as to why they are angry with Pakistan. And Pakistan will be forgiven if Imran Khan is removed. But if it does not happen then Pakistan will have to face difficult times.

Imran said, “Votes will be cast (in Pakistan National Assembly) on Sunday. The decision of this country is going to be taken on this Sunday, which way will this country go now. Is the same slave policy, corrupt people who are facing corruption charges for 30 years.

He said, “Someone told me to resign. Those who used to play cricket with me have seen that I fight till the last ball. I never gave up in life. Whatever the outcome, I will come out stronger after that, whatever the outcome may be.

After Ravens fall apart again in 23-20 loss to Bills, home misery goes from bad to worse

Honda’s bikes and scooters are getting bumper discounts, hurry up, the offer is for limited time

Honda Motorcycles is also offering cashback on bikes and scooters such as Honda Shine, Honda…