Massive fire in Turkey, Greece, Italy and Spain, people unable to breathe due to smoke, hundreds of residents forced to leave their homes 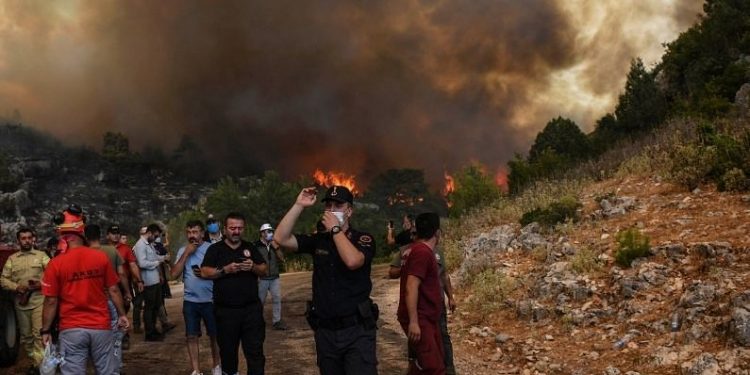 Forest Fires: Due to the fierce fire in the forests of Turkey, dozens of people have to be hospitalized. The President of the country is also being criticized a lot because in this situation he has told the people that the country does not have firefighting aircraft.

Forest Fires in Turkey, Spain, Greece or Italy: Dozens of villages had to be evacuated due to a fierce fire in the forests of the southern part of Turkey. The fire broke out for the fifth consecutive day and so far at least six people have died. At the same time, more than 50 people have had to be admitted to the hospital. While Greece, Italy and Spain are also facing severe fires at this time (Forest Fires). Due to the fire, the temperature has increased significantly, hot winds are blowing at high speed and the effect of climate change is clearly visible. Experts say that all these problems will increase due to the fire.

EU figures show that this year’s fire incidents have proved to be more devastating than ever. Turkey is in the worst condition in the last decade (Forest Fires in Spain). This year, at least 95,000 hectares (235,000 acres) of land in the country has been burnt. While an average of 13,516 hectares of land was burnt during the same time between 2008 and 2020. The city located near Bodrum, the most famous in terms of tourism, has been evacuated. According to local media reports, the country’s roads have become unusable and 540 people have been forced to take shelter in hotels by boat.

Turkish news channel NTV says that the city of Antalya, known as the resort city, has also been evacuated. Here the temperature had broken all the records only last month, but now the temperature is increasing even more (Forest Fires and Climate Change). On July 20, a temperature of 49.1 °C (120.3 Fahrenheit) was recorded in the southeastern city of Cizre. And on Monday the mercury is expected to reach 40 degrees Celsius in Antalya. Turkey’s Defense Ministry has released satellite images showing the damage, with forest areas looking dark and smoke still visible.

Turkey does not have firefighting aircraft

The country’s President Recep Tayyip Erdogan has also been criticized ever since he said that Turkey does not have firefighting aircraft. That too, when one-third of the country’s land is forested and the incidents of fire are also increasing rapidly. EU figures show that there have been 133 fire incidents in Turkey in 2021. Whereas between 2008 and 2020, there were an average of 44 such incidents in the same time period. Efforts are being made to control the fierce fire in the western part of Greece since Saturday morning. Here five villages have to be evacuated (Forest Fire Incidents). People are facing difficulty in breathing and many need to be admitted to hospitals.

Dozens of houses burnt down in Italy

Dimitris Kalogeropoulos, the mayor of the nearby village of Agilius in Italy, described it as “a huge disaster”. About 30 houses were burnt in the flames in the villages of Jimiria, Kamares, Akhias and Labiri. According to EU data, 13,500 hectares of land has been burnt in Greece, while an average of 7,500 hectares was damaged by 2008-2020. Last weekend Italy also came under fire (Forest Fire Latest News). Fires here in Sardinia have destroyed more than 20,000 hectares of forest, olive trees and crops. The country’s fire department said more than 800 fire incidents were recorded this weekend, mainly from the southern region.

Also read- Pakistan scared of ‘refugee crisis’ after spreading terror in Afghanistan, told the world – make arrangements for people in the war-torn country only