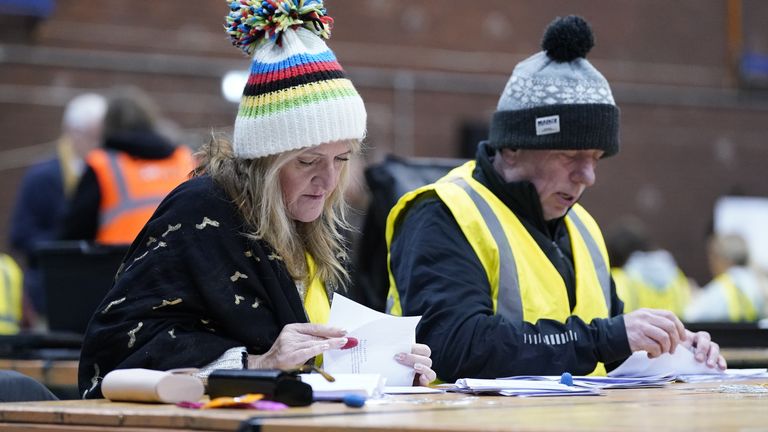 Labour has gained the Chester by-election – the primary public vote since Boris Johnson and Liz Truss had been ousted from Number 10.

Samantha Dixon retained the seat for her occasion with 17,309 votes – a 61% share and practically 11,000 greater than the Conservative candidate.

Labour was anticipated to win however the margin was larger than in 2019, when its majority was 6,164 – or simply below 50%.

It represents a 13.8% swing from Tory to Labour, the sixth largest between the events at a by-election since 1945, and greater than the 12.7% in Wakefield in June.

It can also be the worst outcome for the Conservatives in Chester since 1832, with candidate Liz Wardlaw getting 6,335 votes, or 22.4%.

Ms Dixon advised Sky News the outcome was a “resounding mandate” for Labour, and in her victory speech stated the Tories had been “on borrowed time and people want to change”.

Sky’s chief political correspondent, Jon Craig, described it as a “crushing defeat” for the Tories and “ominous” for the occasion’s probabilities on the subsequent election.

However, he stated it could be harsh to personally blame new prime minister Rishi Sunak for the outcome.

Analysis – Not only a dangerous outcome, however a catastrophe

It comes after a giant disappointment for the Conservatives in two summer season by-elections which noticed Labour snatch Wakefield and the Lib Dems safe a historic victory in Tiverton and Honiton.

The Chester contest was triggered by the resignation of Labour MP Chris Matheson, who was suspended in October after two allegations of sexual misconduct from a former workers member had been upheld.

The outcome follows a droop in opinion polls for the Conservatives after a raft of reshuffles of their high ranks.

The occasion noticed a small bounce of their numbers after Rishi Sunak entered Downing Street final month – the third Tory chief this yr – however the Tories are nonetheless repeatedly polling behind Sir Keir Starmer’s Labour Party.

This is the primary of two by-elections this month, with one other happening on 15 December in Stretford and Urmston, Greater Manchester.

That vote was known as after Labour’s former shadow training secretary, Kate Green, introduced she was standing down to turn out to be deputy mayor of Manchester.