James Webb Telescope: Hubble’s ‘successor’ opens his ‘eyes’ for the last time on Earth, the secret of space will be open 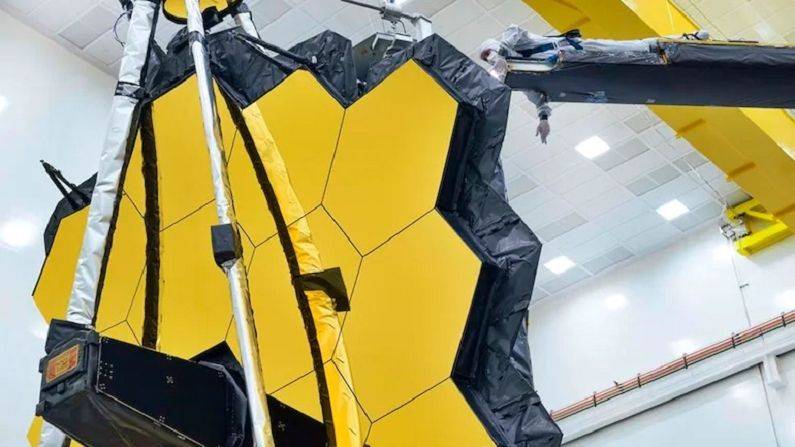 James Webb Telescope completely opened the 6.5 meter long Golden Mirror and after that it locked itself. In this way, scientists took the test of 18 hexagonal mirrors of the web to be ready for the long journey of space. The web telescope will replace the vintage Hubble telescope, which has long been working as a telescope to monitor the universe. The team of Telescope said in a statement that after the Mirror Safety Check, tests conducted on all the rotating parts of the web have confirmed that they will work properly in the environment of the launch.

The primary mirror of the telescope is a technological marvel, said Lee Fineberg, optical telescope element manager for the web at NASA’s Goddard Space Flight Center. Mild mirrors, coatings, actuators and mechanisms, electronics and thermal blankets when deployed as a complete mirror make a lot of sense. During testing, the telescope was commanded to open and deploy the side panel of the mirror. The team added an offsetting device to the telescope to create a zero-gravity environment.

The massive size of the James Webb telescope has come as a major challenge for NASA when it was sent into space. For this reason, scientists have designed a new foldable design using rotating parts, so that the telescope can fold itself into a compact formation. In this way the size of the telescope becomes very small. The new design makes it possible for the telescope to fit the 16-foot rocket fairing inside, which will go into space with the telescope later this year.

Telescope will reveal the secrets of the solar system

NASA scientists hope that once the James Webb telescope is deployed in space, it will reveal the secrets of our Solar System. The telescope will monitor the worlds beyond our stars and will work to find the origin of our universe. Apart from this, we will also analyze the mysterious shapes seen in the universe and will also find out what our importance is in this universe.

ALSO READ: ‘Roses’ blossom in space! Seeing this beautiful picture of NASA, two galaxies found in Andromeda, you too will say, Brother!

Is the ‘real figure’ of deaths in Afghanistan something else? The ‘oxygen crisis’ deepens in the third wave