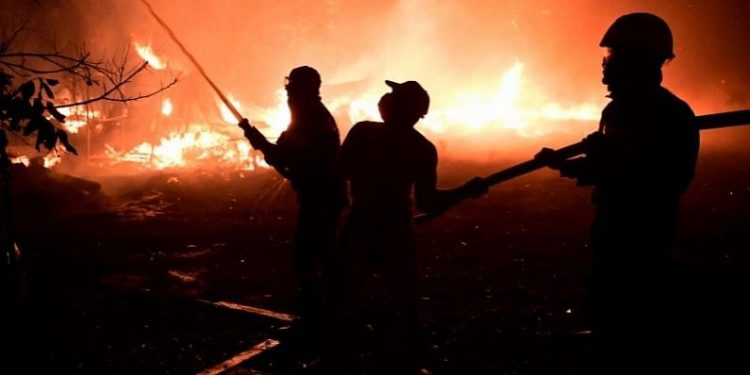 Forest Fires: There is a huge fire in the forests of Greece, which efforts are on to extinguish it. For this, even helicopters and planes have been deployed. But the situation still does not seem to be under control.

Fires in Greece Right Now: Athens, the capital of Greece, is facing a lot of difficulties at this time. The operation of fire-fighting aircraft was resumed early Wednesday to control a massive forest fire in an outskirts here. A day earlier, thousands of people were forced to flee their homes due to fires, as Greece faced its worst heatwaves in several decades. The fire in the suburbs of Athens – Varibobi and Tatoi – is the deadliest of 81 forest fires in the country in 24 hours from late Monday night to late Tuesday.

The fire department said that five aircraft and nine helicopters have been deployed to douse the fire. More than 500 fire personnel, soldiers and various volunteer groups are working on the ground to control the fire. Nikos Hardalias, the head of the Department of Civil Defense, said on Wednesday morning that yesterday was a very difficult night (Forest Fires in Greece Today). But the personnel have been successful in controlling the fire to some extent. However much work still remains to be done.

The fire is getting stronger due to dry wood

Dry woods in the forest due to the long-lasting scorching heat helped the fire to spread and the temperature rose to 45 °C (113 F) (Greece Forest Fires 2021). There are no reports of any person being killed or seriously injured, according to officials. The fire has caused significant damage to houses, vehicles etc. The government has announced that until people return to their homes, they will be accommodated in hotels. The same situation is also in Spain, Turkey and Italy.

In Turkey, as firefighters battled fires in forests and villages along the country’s southern coast last week, criticism of President Recep Tayyip Erdogan’s government has intensified for its callousness and inadequate preparedness to control the fire. (Forest Fires in Turkey). The fire that broke out last Wednesday was triggered by strong winds and scorching heat, killing eight people and forcing thousands of local residents and tourists to flee their homes and hideouts. Burnt and blackened trees remain on pine hills on Turkey’s Turcois coast, while many villagers have lost homes and livestock.