Pakistan’s Prime Minister Imran Khan shared a video of the 1500m race of the Netherlands player participating in the Tokyo Olympics. After this, people told him a lot.

Some user asked Imran Khan to pay attention to the rising prices of medicines in the country, while someone asked to develop infrastructure for the game. Not only this, some users even told Imran that he should learn from India, which won gold in athletics, while Pakistan could not win even a bronze medal.

What did Imran say

Pakistan Prime Minister Imran Khan shared a TikTok video of the 1500m women’s race at the Tokyo Olympics. In this video, Sifan Hassan of the Netherlands collides with a fellow athlete while running and falls. But she stands up immediately and also takes first place in the qualifying race. Sifan Hasan later also won a bronze medal in the 1500 meters race. Sharing the video of the qualifying race, Imran wrote, ‘I want the youth of Pakistan to watch this race and learn the most important lesson of what the game taught me – you only lose when you give up.’

I want the youth of Pakistan to watch the race and learn the most important lesson that sports taught me: “you only lose when u give up.” pic.twitter.com/a7UnCvnwSR

But giving advice on social media was overshadowed by the Prime Minister of Pakistan. One user wrote that the budget of Jawan Program, Hideaway, Trees Tsunami should be allocated to less sports. Plan for the next decade and let me plan for the next big event. Another user said that Twitter can suspend your account for copyright infringement for playing the song of Khan Saheb Coldplay.

One person said that not the youth of Pakistan but sports federations need to learn. Another person wrote, ‘Sorry sir I expected you to tweet in praise of Talha Talib or Arshad Nadeem. He illuminated the name of the country on the biggest stage of sports. That’s the least you can expect from you. 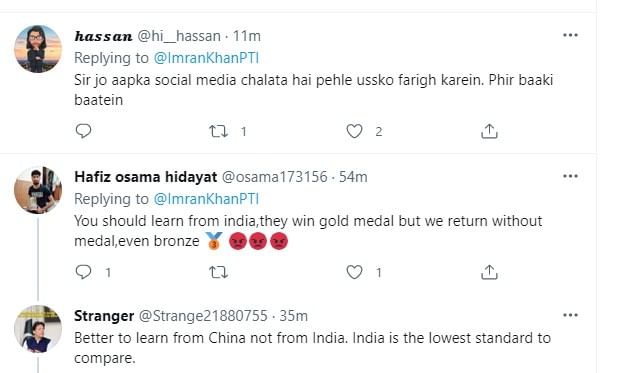 A user named Hafiz wrote, ‘You should learn from India, they won the gold medal, but returned without a medal. Even bronze was not found. Another user jokingly wrote that first of all remove the person running your social media account.

Video: Who is this Afghan woman who gave a befitting reply to Taliban? Carrying out this ‘dangerous mission’ sitting on the front seat of the pickup

Shehnaz is a Corporate Communications Expert by profession and writer by Passion. She has experience of many years in the same. Her educational background in Mass communication has given her a broad base from which to approach many topics. She enjoys writing about Public relations, Corporate communications, travel, entrepreneurship, insurance, and finance among others.
Articles: 3682