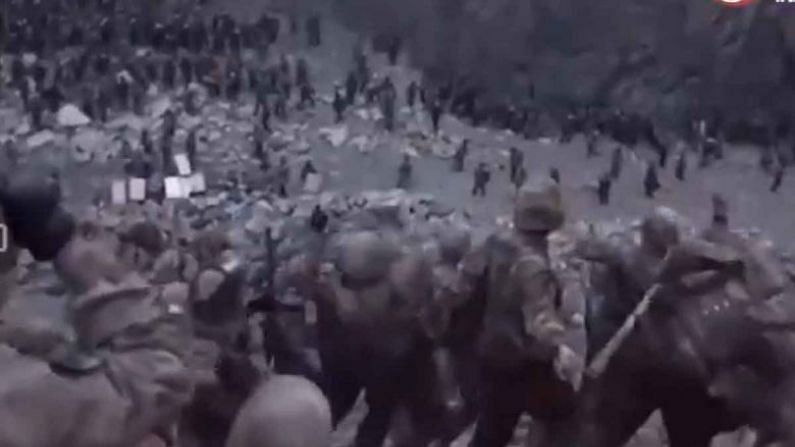 A video of the conflict in Galwan Valley, a Chinese TV station, has been released. It can be seen in this that Indian soldiers are giving a befitting reply to the Chinese soldiers.

Beijing has once again released a video of the conflict in the Galwan Valley amid the ongoing India-China border tensions. In June last year, several videos of the conflict between the soldiers of India and China have been released. In this episode, in this new 48-second video, it can be seen that Indian soldiers are giving a befitting reply to the stones of the Chinese army by being deployed on the frontline in the icy waters of Galvan Valley. It can be seen in this video that there is a face-off between the soldiers of both the countries.

This video has been broadcast on a Chinese TV station, in which the families of the People’s Liberation Army (PLA) soldiers killed in the Galwan violence are being talked about. Earlier, China had also released an unseen video of the clash in Galvan Valley. It was seen in these videos that there is a fierce clash between the soldiers of the Indian Army and the Chinese Army. During this stone pelting can be seen. It was also seen in the video that some Chinese soldiers could not face the cold water current of the river and got swept away in it.

Excerpts from a video interview of a PLA martyrs family shows footage of the #Galwanvalley clash between #India & #China, the stone pelting, close combat fighting, conditions of soldiers in the river & Chinese equipment on site well documented in these 45 seconds pic.twitter.com/4pk60K28jp

A befitting reply was given to China even in difficult circumstances

China hides the number of its soldiers killed

China earlier claimed that four of its soldiers were killed in the violence in the Galwan Valley on the night of June 15. But later their number was increased to five. At the same time, according to intelligence estimates, 40 to 45 Chinese soldiers were killed in this violence. On the other hand, 20 Indian soldiers were martyred in the violence in Galwan. Where India had given the last farewell to its martyrs in a respectful manner. At the same time, China kept the number hidden for a long time. Chinese soldiers ambushed Indian soldiers in Galvan Valley. After this, he himself refused to attack.

Also read: In China, the ‘shaken earth’, 12 thousand houses were demolished in a few seconds, hundreds of people were killed in the powerful earthquake