Coronavirus: Essential medical equipment given to India by a US hospital, including PPE kits and other items 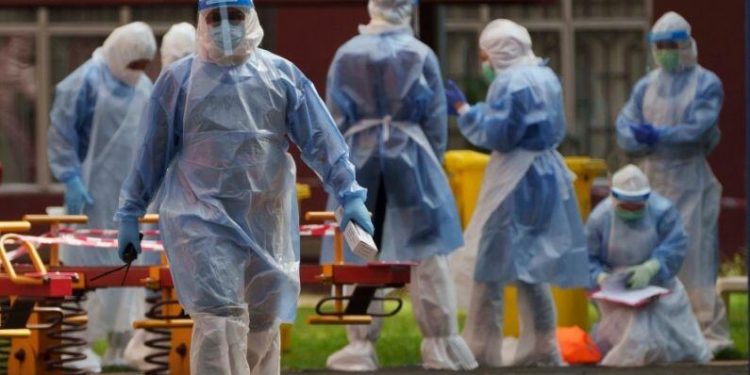 US Helps India: Help was provided to India by America even before this. Cases were coming at a record level in the second wave of corona virus, then medical equipment was given from America.

US Help India Against Covid: A hospital in Maryland, US, has donated personal protective equipment (PPE) kits and two ‘Continuous Positive Airway Pressure Therapy’ (CPAP) machines to India as a part of COVID-19 relief. An Indian-American non-profit organization has given this information. Sewa International received this consignment of medical equipment during a recent event in Maryland. Which includes many essential medical equipment.

In a press release issued in the media on Friday, it was told that the consignment includes masks, face shields, gloves, goggles and full length PPE kits similar to N-95 (Medical Equipments). The donated materials were shipped from Hyattsville, Maryland, in seven trucks to Sewa International’s warehouses in Atlanta, Georgia, immediately after the event, according to the statement. Prof. Srinath, former President of Seva International, who was present at the event, said, ‘This is the largest grant of medical equipment to the service from any hospital in America.’

Help being given to other countries also

Srinath said, ‘Seva is shipping PPE kits to Trinidad and Tobago and some countries in South America which are facing the second wave of COVID-19 (US Helps India). CPAP machines will be sent to India. Dr Shiva Subramaniam, a leader of the Indian-American community and a pediatric cardiologist at Georgetown Medical Center here, said that these PPE kits will help patients as well as frontline workers such as doctors, police officers, firefighters and health workers to fight COVID-19. Will help provide protection from 19.

America had helped before

Dr Subramaniam has acted as a liaison between MedStar and Seva International. Dr Anita Roy, who received the PPE kit from Sewa International, thanked Medstar for the donation (US Help India Against Covid 19). According to the data released by the Government of India on Friday, 4,19,470 people have died due to corona virus in the country so far and infection has been confirmed in 3,12,93,062 people. Earlier, when the second wave of corona virus came in India, even then America had provided help to India.

Record cases were revealed in the second wave

Around three to four lakh cases were being reported daily in India at the time of second corona virus. While thousands were dying. During this period, there was also a shortage of medical oxygen and other equipment in hospitals. People had to stand in long queues for oxygen. During this, help was given to India from all over the world. Many countries including America, Israel and Saudi Arabia had helped India by giving other items including oxygen.

Also read- India-Pakistan Relations: America’s statement once again on the deteriorating relations between India and Pakistan, advised to work together

Also read- The ‘ghost’ roaming the streets in Indonesia has been entrusted with scaring people, but why?