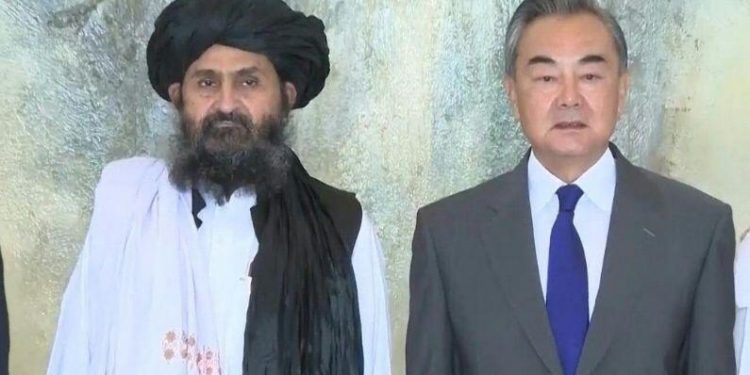 Talbian China News: Amidst the ongoing violence in Afghanistan, Taliban leaders have met Chinese Foreign Minister Wang Yi. The Taliban have also described China as their “trusted friend” and accepted one of its demands.

Talbian China Latest News: A Taliban delegation led by Mullah Abdul Ghani Baradar suddenly arrived in China on Wednesday and held talks with Chinese Foreign Minister Wang Yi. During the talks, the Taliban described Beijing as a “trusted friend” and assured that the group would not allow “anyone to use the territory of Afghanistan”. This is the first meeting between the Taliban and China since the withdrawal of US and NATO forces from Afghanistan.

The Taliban have taken control of much of the territory occupied by government forces, prompting China to worry that the East Turkestan Islamic Movement (ETIM), a Uyghur militant group from its volatile Xinjiang province, might infiltrate through the Afghan border (Talibanis Meeting With China). ). Chinese Foreign Ministry spokesman Zhao Lijian confirmed at a media briefing that a delegation led by Baradar met with Wang in the port city of Tianjin, near Beijing.

The ministry also shared on social media photographs of Wang’s meeting with Baradar and his delegation. A few days before this meeting, on July 25, Pakistan’s Foreign Minister Shah Mehmood Qureshi met Wang in the city of Chengdu (Does China Border Afghanistan) and both countries announced that Pakistan and Pakistan would be ready to drive out terrorist forces in Afghanistan. China plans to launch ‘joint action’.

During Wednesday’s talks, Wang expressed hope that the Taliban could draw a line between themselves and the ETIM (Talbian China Pakistan News), Zhao read a press release issued after Wang and Baradar’s meeting. A recent UN report said hundreds of ETIM fighters have gathered in Afghanistan’s Badakhshan province, which borders China’s unstable Xinjiang province. Wang said that the ETIM is a listed terrorist organization, which is a threat to territorial integrity.

He expressed hope that the Taliban can draw a clear line between themselves and the ETIM. This will create a favorable situation for the elimination of terrorism. Baradar said, ‘China is a trusted friend.’ “They appreciated China’s fair and positive role in the reconciliation process,” the release said. “Afghanistan will not allow anyone to use its territory for anything that undermines the interests of its people,” Baradar said without referring to the ETIM.

Taliban talks about relations with neighbors

“Afghanistan would like to build friendly relations with its neighbours,” Baradar said. Afghanistan Taliban would like to make more partners for future development. “The Afghan Taliban will create a conducive environment for investment and will make relevant efforts in this regard,” he said. “Afghanistan has the seriousness to reach reconciliation and wants to create a framework that is acceptable to all factions,” he said. The Taliban will ensure the rights of women and children.

China will play a role in the peace process

“We respect the sovereignty and integrity of Afghanistan,” Wang said. We do not interfere in the internal affairs of Afghanistan. We follow a friendly policy towards the people of Afghanistan. He told Baradar that after the hasty departure of US and other NATO troops, the Afghan people have new opportunities for sustainable development of their own country (US NATO Troops in Afghanistan). Describing Afghanistan as an important military power, Wang said that China is ready to play a constructive role in Afghanistan’s peace and reconciliation process.

Also read- Imran lashed out at America for the bad condition of Afghanistan, fearing getting trapped in Pakistan’s war, said – called me ‘Taliban Khan’

Also read- World News Bulletin: China is preparing to put the world in another danger, accident in America, read five big news of the world