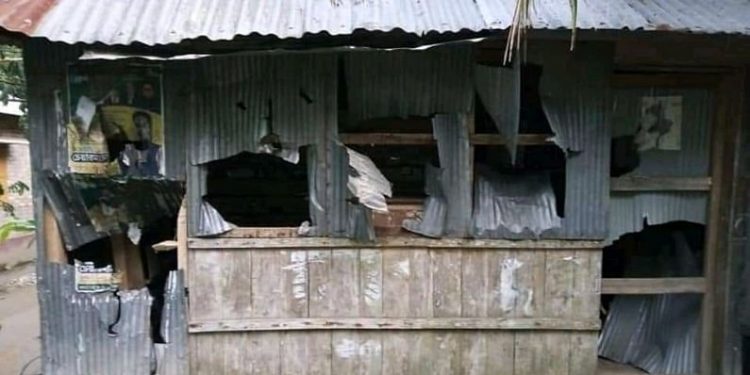 After a dispute in Bangladesh, houses and temples of the Hindu minority community have been vandalised. At present, police have been deployed in the area.

In Bangladesh’s Khulna district, miscreants have attacked at least four Hindu temples, some shops and houses of the minority community. Police have arrested 10 people for their involvement in the attack, while security in the area has been tightened. This information has been given in Bangladeshi media reports. According to the Dhaka Tribune report, the incident took place on Saturday in Shiyali village of Rupsha Upazila. Actually, there was a heated argument between Hindu and Muslim residents on Friday night. After this this incident came to the fore.

According to the local residents and the victims, the miscreants first attacked the Shiyali Maha crematorium. They dismantled the idols kept in the temple and the crematorium. According to the report, from there they went to Shiyali Purbapara area, where they vandalized the idols of Hindu deities at Hari Mandir, Durga Mandir and Govinda Mandir. It said that six shops and two houses of members of the local Hindu community were also vandalized. Krishna Gopal Sen, general secretary of Rupsha Upazila Puja Udaipan Parishad, said that at least 10 idols in four temples were vandalized during the attacks.

Deployment of additional police force in the area

Sen said that tension still persists in the area. But the local administration is working to keep the situation under control. Some local residents claimed that the attackers were from neighboring Sheikhpura, Bamandanga and Chadpur areas. But his identity could not be confirmed. Rupsha police station in-charge Sardar Musharraf Hussain said additional police force has been deployed to maintain law and order in the area as tension escalated after the attacks. Hussain said that we are alert and active to keep the situation under control. At present, police force is deployed in the area.

Imam told why the dispute happened

Maulana Nazim Uddin, the imam of the local mosque, said, “People of the Hindu community were walking towards Shiyali Maha crematorium while singing kirtan during Isha prayers on Friday night. This caused a scuffle. He said that when I requested him not to sing kirtan in front of the mosque during Namaz, someone pushed me. Because of this the situation got out of hand. However, the matter calmed down after the police arrived and intervened. Krishna Gopal Sen, on the other hand, said that no one from the Hindu community had pushed the imam of the mosque.