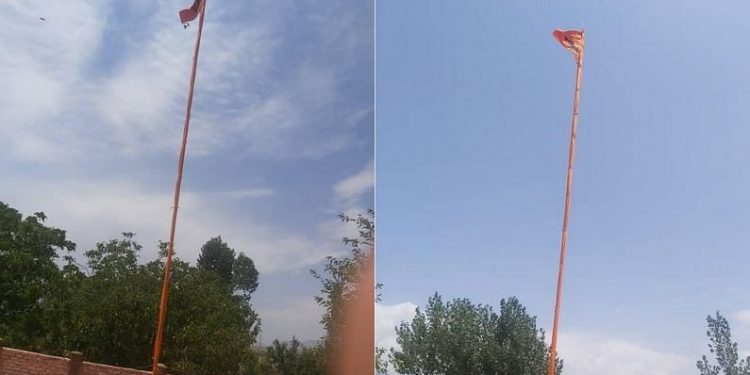 Rehman Chamkni, the caretaker of Gurdwara Thala Sahib, told that Nishan Sahib has been re-established.

The Sikh religious flag Nishan Sahib, which was removed from the roof of a Gurudwara in Pakhtia province of Afghanistan, has been reinstated. Amid international pressure and India’s condemnation, Taliban officials and security forces visited Gurdwara Thala Sahib. The Taliban also said that the gurdwara would continue to function according to its customs. Situated in Chamkani area, this Gurudwara was also visited by Guru Nanak, the founder of Sikhism.

Gurudwara’s caretaker Rehman Chamkni told that last night Nishan Sahib was once again placed on the historic Gurdwara with full respect. He further informed that Taliban officials along with their forces visited the gurdwara again last evening. During this, he talked about working under his customs of the gurudwara. Along with this, he also instructed to put Nishan Sahib in his presence immediately. At the same time, Rehman Chamkni said that he and the rest of the people appreciate the efforts of the Indian government and the international community to ensure that the rights of minorities in Afghanistan are protected.

India had condemned the incident on the removal of Nishan Sahib

India on Friday condemned the removal of Nishan Sahib by the Taliban. At the same time, he reiterated his firm belief that the future of Afghanistan should be one where the interests of all sections of Afghan society, including minorities and women, are protected. Earlier too, India has expressed concern over the situation in the war-torn country and called for peace, saying that peace in Afghanistan is important for lasting peace in the region. India has emphasized the path of peaceful dialogue for the development of Afghanistan. Apart from this, the issue of peace in Afghanistan has also been discussed in the United Nations.

Sikh community has been the target of terrorists

Sikhs living in Afghanistan have been a target of terrorists for a long time. Last year, Nidan Singh Sachdeva, a leader of the Hindu and Sikh community in Afghanistan, was kidnapped by the Taliban from the gurdwara. Sachdeva was kidnapped on 22 June 2020 in Pakhtia province. After this, he was released after efforts made by the Afghan government and community elders. At the same time, on March 25 last year, about 30 members of the Sikh community were killed in a terrorist attack by the Islamic State on a place of worship in Kabul. As of 2020, there were around 650 Sikhs in Afghanistan.