Price and features of OPPO Reno7 series revealed a day before launch! 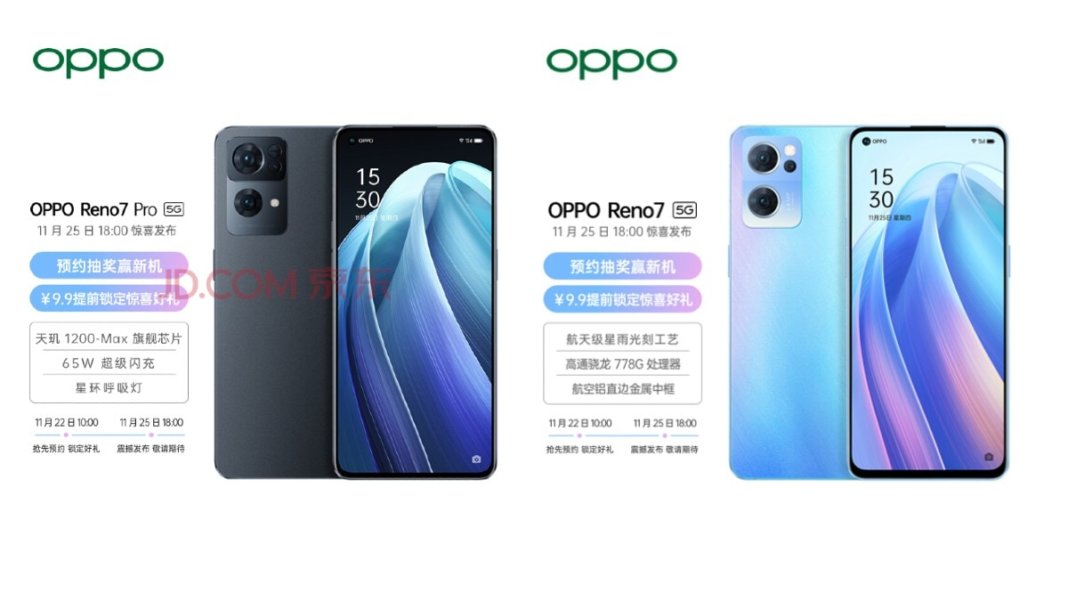 Oppo’s new smartphone series Oppo Reno 7 is going to be released in China tomorrow i.e. on November 25. Many claims have been made about this series so far, in which it has been written about the cameras and design of the phone. Now ahead of the official launch, an e-commerce website has revealed the renders and specifications of the Reno 7 devices. JD.com has tried to give full details of what is going to happen in the Reno 7 series, which is going to be launched on November 25.

This is special in OPPO Reno7 Pro!
According to the website, OPPO Reno7 Pro and Reno7 are the top-end phones of this series. The OPPO Reno7 Pro sports a squared-out design with rounded corners, similar to the iPhone 13. JD’s listing also shows that the thickness of the phone is 7.45 mm. A rectangular camera module with rounded edges has been given in the back side of the phone. The device will be available in three color variants – Star Rain Wish, Dawn Gold and Starry Night Black.
Talking about photography, the Reno7 Pro has a triple rear camera setup, in which a 50-megapixel main camera is available with Samsung’s GN5 sensor. Also fitted is a 64-megapixel Omnivision OV64B ultrawide lens and a 13-megapixel Samsung S5K3M5 telephoto lens. The phone has a 32-megapixel front camera with Sony’s IMX709 cat eye lens.
Reno7 Pro sports a 6.55-inch AMOLED display with FHD+ resolution and 120Hz refresh rate. The phone is powered by MediaTek’s Dimensity 1200 Max processor, which is coupled with 12GB of RAM and 264GB of internal storage. Talking about some more features, then the phone runs on Android 11. In-screen fingerprint scanner is given in it. The battery is 4500mAh, which supports 65W fast-charging. This phone is equipped with connectivity features like 5G, 4G LTE, Wi-Fi 6, Bluetooth 5.2, GPS and USB Type-C port.

Expected Features of OPPO Reno7
In terms of design, this phone will be similar to its Pro model. The display will also be given the same as the Pro variant, but the refresh rate will be available up to 90Hz. Like Reno7 Pro, OPPO Reno7 will also be available in three color options.
The phone has a 50-megapixel Sony IMX766 sensor, a 16-megapixel Sony IMX481 ultrawide lens, and a 2-megapixel portrait lens. The selfie camera is 32 megapixels, with Sony IMX615 sensor. Oppo Reno 7 is equipped with Qualcomm Snapdragon 778G chipset. 8 GB RAM + 128 GB storage, 8 GB RAM + 256 GB storage and 12 GB RAM + 256 GB storage variants of this device are listed on JD.com. The Reno 7 will house a 4500mAh battery, which supports 65W fast charging.

Features of OPPO Reno7 SE!
The Reno7 SE is not listed on any e-commerce website in China, but the phone is believed to come with a 6.43-inch FHD+ AMOLED display and 90Hz refresh rate. The phone can get an 8-megapixel Sony IMX355 sensor with a 64-megapixel Omnivision OV64B primary sensor and a 2-megapixel portrait lens. The selfie camera will be of 32 megapixels. This phone is expected to be equipped with MediaTek’s Dimension 920 processor. It can come in 8GB+128GB and 8GB+256GB internal storage options. It can be equipped with a 4390mAh battery, which supports 65W fast charging.

China, provoked by this statement of US and Japan, expresses serious attack on foreign policy while protesting

Run internet for full 60 days for 249 rupees, this company is offering the best recharge plan

COVID crisis in Nepal, 16 deaths due to lack of oxygen, hospital not admitted to patients