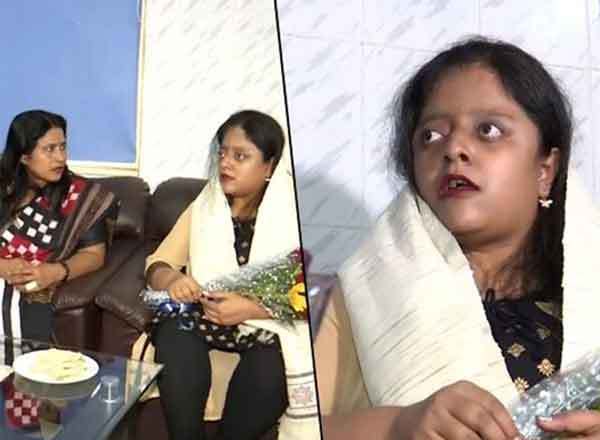 Today, the woman officer we are going to talk about, she dug her eyesight in childhood. The mother began to worry about her daughter’s marriage, but the daughter did not have a burden on her, so she decided to become an officer and today is posted on the chair of the Indian Administrative Service Officer. Tapaswini Das, a resident of Odisha, was the only one who ditched her eyesight. Today, even though Tapaswini Das is a civil officer, but her life is spent in a lot of struggles.

Tapaswini Das has shown that today, which is not easy for everyone. Due to a mistake by the doctor, her second class lost her eyesight, but she never stopped studying. Tapaswani Dan studied in Braille script, audio recording and went through all the classes with good marks. Even after seeing the courage of the daughter, the parents also supported them completely and they considered them more than their daughter less son, the girl who needed support herself, she always supported the parents.

Tapaswini’s father Arun Kumar Das is a retired deputy manager of Odisha Cooperative Housing Corporation and mother Krishnapriya Mohanty is a teacher. Father Arun Kumar talks about his daughter, saying that her son like Tapaswini has been fast in education from the beginning. She also appeared in the list of toppers in the 12th class and also got good marks in the graduate examination. That year was 2003 when Tapaswini was studying in the second class. There was an incident in her life. In a large hospital in Odisha, she lost her eyesight due to the negligence of the doctor.

Tapaswini’s father further tells that only then did Tapaswini think that she would make her name meaningful. To achieve big, you will do penance, practice meditation, practice yourself in every way. While talking about herself, Tapaswini Das says that the terrible tragedy of the year 2003 broke her in away. her parents also worried about her for a long time, thinking what the daughter would do now, how she would read and write, how she would get married. Tapaswini had thought at a very young age that she would not be disappointed nor would she give it to her parents and it happened.

Tapaswini never gave up on challenges

UPSC IAS Tapaswini never gave up on challenges. In every bad time, she tells herself that one should try to get better. After losing the eyesight of Tapaswini, even though she could not study like ordinary students, she took care of herself and started studying in Braille script and passed matriculation. Tapaswini states that any success can be achieved with determination and patience. she had complete confidence inside that she could get success in the first place itself. she passed the civil examination while doing post-graduation in Political Science from Utkal University, Bhubaneswar.

If you are encouraged, then anything can be done, however difficult it may be.

This is the second time in Odisha when a visually challenged candidate has passed the Civil Service Examination. Earlier in the year 2017, eight visually impaired candidates passed the Odisha Civil Service Examination. Talking about this, Tapaswini says that those who can see can read books, but it was really very difficult for them to prepare for such a tough exam, but the hope of becoming something is also studied, preparing and passing the officer. She has become.

China’s automobile sales suffered a major setback, the country’s economy is also having a big impact

In the year 2015, 13 million Honda cars were purchased from digital currency, today this cryptocoin has become bigger than Honda

Front to get justice for landless, homeless and non 7/12 farmers on 29th December