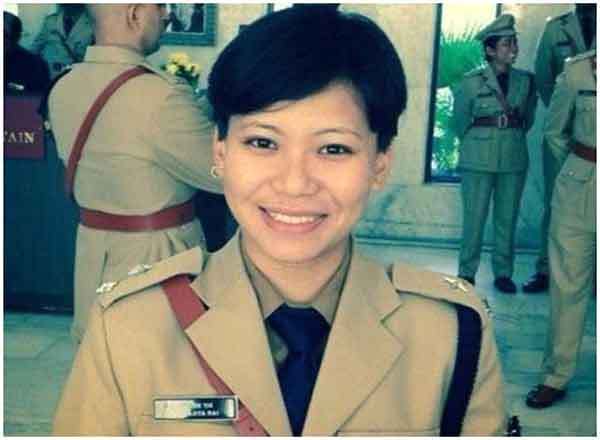 Success Story of IPS Topper Aparajita Rai crossed every difficult Sikkim’s first female IPS officer: A person becomes most vulnerable when she is of childhood or old age, and the shadow of an elder and or her father rises from her head. After this, it becomes impossible for her to overcome every difficulty. He moves forward, what she does not understand, but she who overcomes this difficulty with her hard work becomes the example of success. Such is the story of Aparajita Rai, a resident of Sikkim. Aparajita Rai today holds the post of the first IPS officer of Sikkim.

In the year 2011, she passed the IPS exam while creating history and that was because she was the first woman there who had passed the examination of an officer. So far no woman has been selected for this post. Nothing will surprise you more when we tell you that Sikkim is a place where no one knows or is interested in services like civil services. During an interview, Aparajita says that After getting the post, she also had a mind to make the youth of the country aware of the civil services so that more people would like to join this service.

Aparajita Rai comes from a well-educated family. Her father was a Divisional forest officer and mother was a Graduate Teacher. Aparajita has also been very good in studies. Everything was going well that her father would die suddenly at the young age of eight. In such a situation, all the responsibility of the house now came on Aparajita’s mother, in which Aparajita Rai too soon started giving her full support.

She often used to come to government office many times due to some work. Every time she got very upset and did not know how to work even after many rounds. It was just that time when they decided that they would one day become big officers and people would not have to bear the harassment and torture that usually happens in government offices.

Success Story of IPS Topper Aparajita Rai: Aparajita Rai was quite brilliant since childhood. She was a state topper in school and also passed the IPS exam with 95% marks. At the same time, she was also awarded the Best Girl All Rounder Mrs. Ratna Pradhan Memorial Trophy at Tashi Namgyal Academy. He later completed her BA LLB. Then by winning a gold medal from National University of Juridical Sciences, Kolkata in both jurisprudence and public administration, she proved herself once again that she can do anything.

Aparajita Rai gave the UPSC exam for the first time in the year 2010 and the special thing was that she passed in the first time and she was also selected. However, her rank was not on her mind at that time. Aparajita had achieved 768th rank at that time. She tried Phil the next year in 2011 and this year she was ranked 358th. Also IPS service. 28-year-old Aparajita also received an IPS cadre in mother-in-law in 2012. Aparajita finally fulfilled the dream she had in childhood. Had IPS not been an officer, Aparajita might have been a corporate lawyer as her father had wanted. Well, where her father will be today, she will be happy to see her daughter as an officer.

Oppo launched 50MP Find X3 Pro, you will be stunned by the design and features.

Keep yourself healthy during rainy season, eat these things

Prices of all variants of Mahindra XUV700 announced, know when booking and delivery will be done, ‘Add to cart’ feature on website