Meet the daughter of India who washes the hair from the soil of the village, conquering the highest peaks of four continents including Mount Everest. 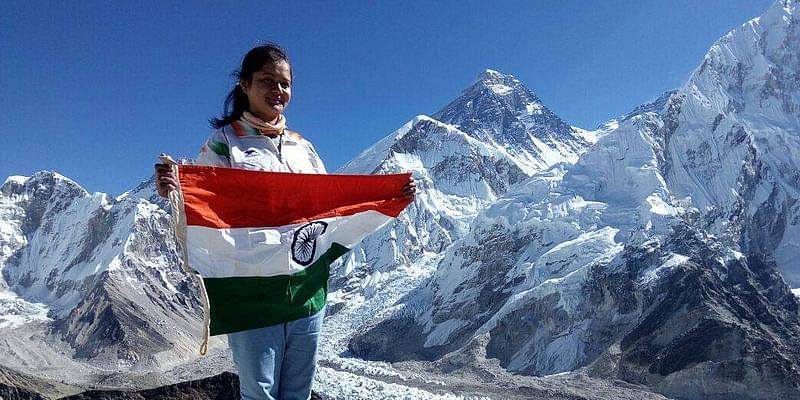 The dreams of Megha Parmar, who was born to a normal farmer in Bhoj Nagar in Sehore district of Madhya Pradesh, were always touching the height. Chasing her dreams, Megha did what people only imagine. Megha is the first woman climber of Madhya Pradesh to conquer Mount Everest, not only this, but Megha has also crowned the first female mountaineer of Madhya Pradesh to conquer the highest peaks in four continents of the world. Megha is also the brand ambassador of ‘Beti Padhao, Beti Bachao’ in Madhya Pradesh and she also gave a message of ‘Beti Bachao-Beti Padhao’ to the countrymen from thereby hoisting the tricolour on Mount Elbrus, Europe’s highest peak in 2019.

26-year-old Megha, who started making mountaineering her hobby at an early age and then fulfilling it with dedication, is an inspiration to all the girls in the country who want to overcome their difficulties in life and achieve their goals. Huh. In a special conversation with Yourstory, Megha has shared some special aspects related to this particular journey and her life.

Read some special excerpts of the conversation with Megha-

How was your childhood

Megha- I come from Bhoj Nagar, a small village in Sehar district, Madhya Pradesh. Both mother and father are farmers and I am from a joint family. The number of women in our house is high, due to which the atmosphere of the house was somewhat different. For example, when rotis were made at home, my brother used to get ghetti rotis, whereas there was no ghee in our loaves. There has always been a stubbornness in me about equality and I used to demand it at home.

Then my mind also took the thought that I have to do something that my parents feel proud of me.

After some time I had to go to my maternal uncle’s house for further studies, where I had to face some new challenges mentally, then I had to study from Boys School because there were no other schools in the area and this Like we had only 6 girls studying in that government school there. In that school, we had to get special permission to study mathematics and science, because only subjects like home education and arts were available for girls.

How was the journey before Everest?

Megha- (Laughing) God has also taken a big test during my journey. I started struggling right from college days, because I had to go to the fourth floor of the house to get water too (and in a funny tone) I feel that my legs got stronger due to this.

Apart from all these things, if you talk about money, then it takes 25 lakh rupees to climb Mount Everest and I had no idea about this.

During this time I used to go to business people and used to say to them, ‘Have you seen the Sultan film? I used to remind him of how the small businessman sponsored Salman’s wrestler character in that film. I used to tell them that you sponsor me and with my success your brand will also become famous.

Despite everything happening in the year 2018, I missed out on Mount Everest from a distance of seven hundred meters. During climbing, it is really difficult to climb with heavyweight and heavy shoes. Strength in the body also decreases and many physical problems are also faced.

After this, when I went back to the village, I also had to face the talk of the people there. After a few days, I went to training and during wall climbing, I fell down due to a trainer missing a rope and my spine was fractured in the 3rd place.

It took a year of recovery and my weight also increased, then I concentrated on losing weight, training and collecting money and then the last year of 2019 came when I was looking at the world from the tallest of the worlds. . I was accompanied by one mountaineer each from Russia, Iran and Argentina and we were pursuing a similar dream.

How was the Everest Fatah experience?

Megha- When I reached Mount Everest, the highest peak in the world at 5 am on 22 May 2019, I just realized that there is either sky above it or there is God. At that time I was at the top of the world. Although there were many difficulties on the way during that time, I had no idea to give up the courage. I wanted to capture every scene in my eyes at that time.

How did this idea begin?

Megha- I was aware of my identity since childhood. I wanted my identity not to be limited to marriage only in the future. I wanted to be Megha Parmar.

I also speak to all the girls that it is important to play all the roles in your life, but also to give importance to your name. Do whatever you want to do with your mind.

I read in the newspaper that two boys from Madhya Pradesh have conquered Mount Everest, I used to think that why can’t I become the first woman of Madhya Pradesh to do this?

As a girl I faced many difficulties, but my mother and father always stood by me. I believe that when we listen people listen, but we have to focus only on moving forward.

In the environment from which I come, girls are soon matchmaking and it has been 17 years since my matchmaking, but this has never come before me as an obstacle in my progress.

Now today when you are illuminating the name of your family, your state and this country, how do you feel?

How was the reaction of people after your success?

Megha – I still remember the moment when my father had placed his father on his shoulders. I felt most proud only when my father received more respect. When I went to meet CM, he got up and came towards me and it was a proud moment for me. PM Modi retweeted my tweet when I was making masks for the needy people during the lockdown and that was a proud moment for me. I have achieved all this only after mountaineering.

Today after this work of mine, other girls of the area have also got the freedom to do their desired work. Today, when girls tell me their inspiration, I feel proud.

How was the experience on other mountains?

Megha- After Mount Everest, I didn’t want to stop and I wanted to move on. Climbing Mount Elbres of Europe was a challenge because the weather there challenges you every moment. During the climb to Mount Kilimanjaro in Africa, I was leading the team and thus I had more responsibility and challenge on my shoulder. During this time, a 15-year-old boy and an old man were also going to climb the mountain with me.

Tell us about your trainer.

Megha- My trainer Ratnesh Pandey is my mountaineering guru. He has a huge contribution in conquering my Everest. He himself is also an inspiration to the people because his journey has not been easy at all and he has faced all the difficulties to fulfill the dream of conquering Everest.

How is time in the Corona era?

Megha- During this period I lived in the village and produced Screen Sheet Masks, which were the first screen sheet masks in the country and this helped a lot of doctors and front line workers of the country.

I have also organized a large scale plantation campaign in the area by mobilizing the children of my village, in which we have planted many mango and neem plants. There are animals in our house and I also help the family in looking after the animals.

I am attached to the village and I also ask all the people to come back to their village. We must also return to our roots to move forward.

What message would you like to give to all the parents of the country?

Megha- There is a very cute slogan in our country, ‘If you do not save your daughter, where will you bring your daughter-in-law?’ All the essence is hidden in this one line. Girls also have to understand the real meaning of freedom, it has to understand its meaning. We need to move both culture and innovation together.

I believe that God made us so hard, then we have come into this world to create history. We have to understand this.

I say that if you have come half way, do not go back, because it will take the same amount of time and effort to go back half way. Go the whole way and write history.

Who was the real Paan Singh Tomar? The ‘rebel’ in whose name the police were afraid