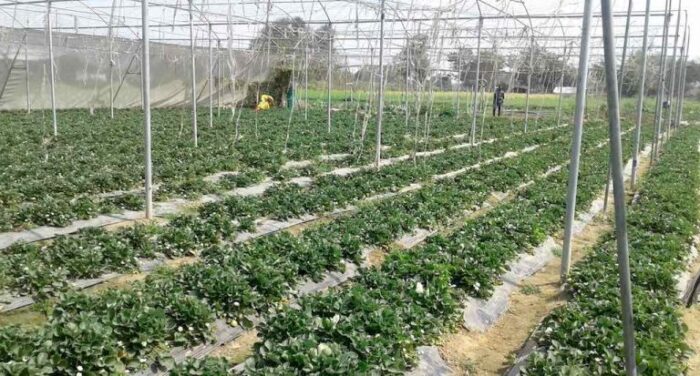 Chilhaki Bigha, a small village in Bihar that comes under a drought-prone area, has only 60 houses. The village was known for its cultivation of rabi, wheat, pulses, mustard and vegetables. Despite the opportunities of agriculture, the villagers often migrate because they get little benefit from agriculture.

You will be surprised to know that in this village, which is neither a hill station nor the land here, it is fertile but people here have succeeded in growing the strawberry crop. This has not only increased the range of benefits for the villagers but has also increased the employment opportunities in this underdeveloped area.

The change in this village was due to Brijkishore Mehta’s son Guddu Kumar who works in a farm in Hisar, Haryana. When Brijkishore asked his son about his work in Hisar, he told about strawberry cultivation.

Brijkishore says, “At first I didn’t know what the strawberry looks like, I decided to grow it, then my son himself decided to live in the village itself.”

The climate of this village was very similar to Hisar. Brijkishore, therefore, thought of planting it. Before taking the risk, Brijkishore went to the Agricultural Science Center in Aurangabad. He advised Brijkishore to go to Central Agricultural University in Pusa in Samastipur district. Agricultural scientists there said that it is impossible to cultivate strawberries in Bihar. Brijkishore got sad and disappointed on hearing this.

Hearing all this, Brijkishore was adamant on taking risks. He met the farmers of Hisar with his son. He finally planted seven strawberry plants in his farm in 2013.

“In the end 500 new plants were prepared from those seven plants. They proved the agricultural scientists wrong. “

Seeing the success of strawberry cultivation, the people of the village also started its cultivation after consulting Brijkishore. This change reached the entire village and surrounding areas and it also benefited from farming. The villagers who had migrated and gone out also returned.

Speaking to Village Square, a local resident Premanand Kumar says, “I am very happy that I earn Rs 7000 a month from it.”

Today, Brajkishore and his three boys have 15 permanent employees and 30 temporary employees for their work. In addition to their two bighas of land, they are sowing strawberries with 6 bighas of land in lease. Many women from neighbouring villages are also getting jobs in this village. They are getting ₹ 200 more food for 1 day for this.

Some farmers are scared of the risk associated with planting strawberries because it requires a lot of initial investment and preparation of the land, if it is done well then it gives better returns. Initially, there was a big challenge regarding the distribution of strawberries in this village because the buyers could not believe that this is possible in Bihar. But as the numbers increased, traders refused to buy.

In view of this situation, farmers started selling strawberries after reducing the price. He sold to wholesale traders at the rate of ₹ 200 and ₹ 300 per kg. Finally, after much struggle, merchants extended a helping hand to the villagers. The 10 traders from Kolkata who used to come from the wholesale fruit market took fresh strawberries directly from the fields of Chilhaki bigha daily.

Demand for strawberry cultivation in this village and surrounding areas started increasing. Due to this, the villagers started benefiting a lot. Farmers here earned 2.5 to 3 lakhs from a bigha in a short time. The concept of this farming was not found in any research paper of agriculture. The Krishi Vigyan Kendra there started training for some farmers of Chilhaki Bigha village on the model of strawberry cultivation. He began to help the farmers in everything related to planning and farming.

A veteran industrialist of India, who made personal assets worth 19 thousand crores from small business of jute

The seeds of hope bloom only in the midst of unimaginable possibilities. Chilhaki Bigha village has become an inspiration for farmers across the country. What science had also called impossible, the people here took the risk and did that work and also achieved success.

Homemade remedy to get rid of jaundice, but it is better to take doctor’s opinion

-Seema Kumari A disease called ‘Jaundice’ is commonly seen in newborn babies. But, this disease…

Daughter’s Day 2020:  27 September means Daughters’ Day on Sunday. You can invest to secure…