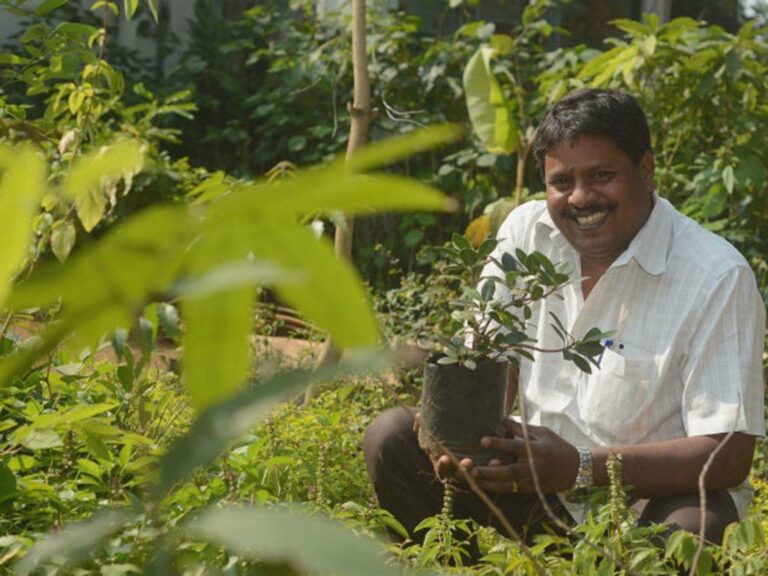 If you ever get a chance to travel by Tamil Nadu State Transport bus number 70, you will meet the person whom people The tree man Let’s know by name. The Tree Man, who is actually the conductor of the number 70 bus, has been leading a major change. He has the honour of a large class for his selfless and sustained work towards his environment.

Am Yoganathan For almost the last three decades has struggled to save the environment. Over the years, he has grown more than three lakh saplings in 32 districts of Tamil Nadu with his own earnings. They spend forty percent of their monthly salary to buy saplings for planting and to make the children of local schools and colleges more environmentally conscious.

Yoganathan comes from a middle-class family. During his school days, he used to sit in the scorching heat under the shade of trees and perform poems on nature. Their struggle started when in 1987 they lived in Nilgiri. There she led protests against the wood mafia of Kotagiri and also strongly protested against the felling of trees as a firewood girl.

Despite being rejected by more than 50 investors and many failed startups, this boy built a company of crores

Even though Yoganathan could not continue his studies after twelfth, he never stopped learning from Mother Nature. They used to assimilate every information towards the environment with great readiness.

He has been working as a full-time bus conductor for the last 15 years, yet always takes time for his passion to plant trees.

Says Yoganathan, “Every week on my holiday, which falls on a Monday, I go to school, college and university educational institutions to plant trees.”

Yoganathan’s strategy is based on a simple idea that yields the best results. Every day, after his work shift, he comes out with his laptop with presentation slides. They meet students from various schools and colleges and show them the slides.

He says, “Every time I show those slides to the students, each time they are ready to plant themselves.”

When a student plants a tree, each tree is named its planter. In this way, the student starts going there for the first time and every time to look after the tree named after him. The first plant of Yoganathan’s rope has now become a bulbous cloak laden with red flowers. After the plant is planted, Yoganathan takes the full address of the student of the tree and keeps in constant touch to take care of the plant. Till date, he has made children aware of the importance of trees by visiting more than 3700 schools.

Started his business after being insulted by the boss, it started small, but today has a turnover of 20 crores

Even after planting so many trees, Yoganathon has not had his life full of flowers. He lives in a rented house and therefore has to leave the house from here to there with his wife and two children. When they plant trees in rented houses, the landlord immediately asks them to leave. They not only get applause, even there are so many cases filed against them by the Forest Department. The cases are being carried out due to Yoganathan’s insistence on planting trees along the road and then not cutting them.

On the other hand, he has received 14 big awards so far. Of state government ‘Environmental warrior’ Chief among them. How many times has it happened that due to lack of money, he has not been present to receive the award? This Green Revolution has its own website in which information about all their activities so far is accessible.

They believe that every person should plant a tree. Yoganathan has received little financial support but his own family’s moral support motivates him to make frequent sacrifices in this yagna. Almost all the trees planted by them are alive and growing. The concern for the safety of nature and the environment is the responsibility of every person and only then we will be able to give green earth to the future generation.

Again in the U19 Asia Cup ‘this’ batsman’s blast, India reached the semi-finals after defeating Afghanistan

Vinay Kumar Today, in the very exciting match of U-19 Asia Cup played between India…