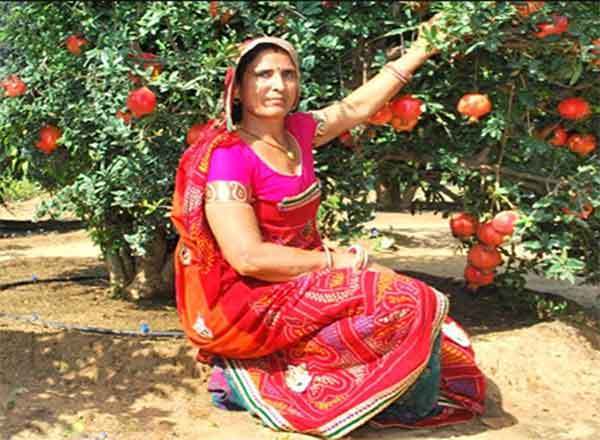 Agriculture Success Story This woman farmer showed amazing, earning 30 lakhs from 1.25 acres of land: In today’s era, along with the maximum number of farmers, women farmers are also taking part. At the same time, daughters and women of the country are also not behind in this matter. Till now we have told you about many women farmers, who have cultivated on their own, prepared good crops and are also earning good profits from that good crop. Even today, we are going to tell you about a woman farmer who is earning 30 lakhs from 1.25 acres of land.

Women farmers are earning 30 lakhs from 1.25 acres of land

Almost all of you know that the soil of Rajasthan is not considered to be very fertile for farming and when you have very little land like 1.25 acres, then people would not like to work hard on it, but now if someone is on this land Cultivate apple and pomegranate and not only that, if you earn 25 to 30 lakh rupees from this land, then you will say that it is impossible.

At the same time, this has been shown by the women farmer of Rajasthan Santosh Devi Khedad. Santosh Devi has not only changed the price of this land in her Sikar district. While talking about this, the female farmer Santosh says that when she thought of doing farming, the soil of the farm was spoiled due to repeated use of chemicals. There was neither tubewell nor any well in the field. Someone suggested Santosh’s husband Ram Karan to cultivate pomegranate.

Sold a returning buffalo and installed Tubewells in the field

Agriculture Success Story Santosh further states that but her family did not have so much money to buy fertilizer from the market, due to this, Santosh herself made organic manure. Sold a returning buffalo and planted tubewells in the field and bought pomegranate plants with the remaining money. Due to lack of water, she started irrigation of pomegranate plants from the drip system. Santosh Devi used to do organic farming in Maike, so whatever Santosh had learned there.

Farmers income will increase with a new agriculture bill, freedom from middlemen: PM

Santosh says that everyone started using it and 3 years of hard work paid off and in 2011, Santosh made a profit of 3 lakh rupees. After that she never looked back and today she earns 25 lakhs from the same land. She also works for selling plants and a large part of her income comes from there. This year they have sold 15,000 plants.

Farmer Success Story Tell us that Santosh Devi did another miracle by planting an apple tree in her field. We all know that apple fruit grows only in colder regions like Himachal or Kashmir, but Santosh Devi managed this plant with her hard work. she has proved that everything is possible in the world if we work with true hard work and dedication.

Also read: – Agriculture Success Story: The story of a farmer who cultivated guava that takes a long line to buy

If there is a problem of tonsils, do not worry, do this home remedy immediately, you will get relief

Six other players, including Srikkanth, Corona positive, out of India Open

Post Office Savings Scheme: How can a claim be made in case of untoward incident?