Whose eyes do not like Team India, when ‘that’ critic openly praised Jasprit Bumrah 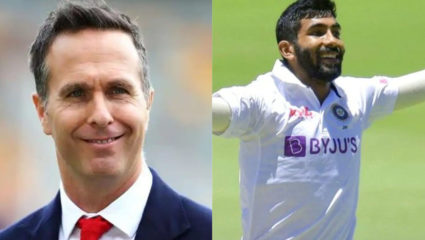 Jasprit Bumrah, the deadly fast bowler of the Indian cricket team, in the third and deciding match of the Test series against South Africa at the Newlands Stadium in Cape Town, once again showed the cricket world’s pundits, why he was shown the world. Best fast bowler of all time.

Former England captain Michael Vaughan could not stop himself from Jasprit’s lethal bowling and he openly praised Bumrah, which came as a surprise to the cricketing world. Because, in general, Michael Vaughan has been seen criticizing and criticizing the Indian team and players.

How good is @jaspritbumrah93 !!! I reckon across all formats he is the best in the World at the moment .. #SAvIND

Michael Vaughan in his tweet on his official Twitter account called Jasprit Bumrah the best fast bowler. He wrote, “What a great bowler Bumrah, I think at the moment the best bowler in the world in all formats of cricket.”

It is worth noting that Michael Vaughan is one of those former legends who never leave any opportunity to criticize the Indian team. In such a situation, praise of an Indian cricketer from Vaughan’s side is not a minor thing. Remind you that last year in 2021, when Team India had moved home without completing the tour of England during the second deadly wave of the Corona epidemic, Michael Vaughan scolded the Indian team as well as the BCCI. Was.

At the same time, former Indian team batsman Wasim Jaffer, who gave a befitting reply to Michael’s sharp and bitter statement and comments, has also praised Jasprit Bumrah. Especially while sharing the memes about the dismissal of Marco Jansen, Jaffer praised. It is worth noting that Jasprit Bumrah started his international Test cricket career from this ground in Cape Town in 2018 only about 4 years ago.

The bowling of India’s deadly fast bowler Jasprit Bumrah has also been praised by former South African legend Shaun Pollock. Shaun said, “Jasprit has troubled the South African batsmen the most in this series. He is a brilliant bowler.”

Mahatma Gandhi made a sacrifice to liberate the country

Now iPhone 13 will be ‘Made in India’, Apple starts trial production