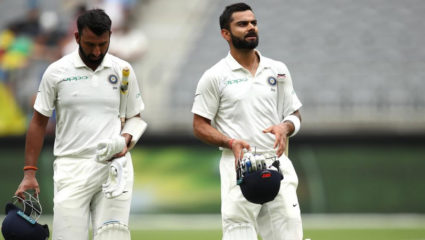 In the third and final title match of the 3-match Kibtest series between India and South Africa, the battle will start in Cape Town from today. The clash will take place from January 11 to January 15 at Newlands, Cape Town.

The history of international Test cricket shows that the Indian team’s record at this ground has been very poor. At present, this latest series is tied at 1-1. After a historic victory in the first match of the series at the Centurion ground, the Indian team lost in the match played in Johannesburg.

History is witness that Team India has never been able to win a Test series in South Africa for almost 30 years. And, if we talk about the Cape Town ground, Team India is waiting to win a Test match in Cape Town for the last 29 years. It is worth noting that, on this ground, India played a Test match for the first time in 1993 in the tour of South Africa. Since then, Team India has played 5 Test Test matches at this ground, out of which 2 matches were drawn and India had to face defeat in 3 matches.

History of India ‘vs’ South Africa at Cape Town Ground

It is worth noting that the Indian team last played a Test match against South Africa in 2018. That match Virat Kohli. It was played under the captaincy of Virat Kohli Captain Indian Cricket Team, in which South Africa defeated India by 72 runs. Earlier in 1997 they were defeated by 282 runs and in 2011 by 5 wickets. Yes, the matches played at this ground in the 1993 and 2011 tours of South Africa were drawn.

In the history of Test cricket so far, India is playing the sixth test match against South Africa at this ground. Virat Sena has a golden opportunity this time to win the Test series in South Africa. Not only this, it is also a great opportunity to get the first win in Cape Town ground. The special thing was also seen in this latest series that, India always kept winning in the field of Johannesburg, but had to face defeat in this latest tour.

This match is a danger bell for Virat Kohli and Cheteshwar Pujara.

This is the second match of Indian captain Virat Kohli at this ground in Cape Town. In the match played before this, he has scored only 33 runs in both the innings. Cheteshwar Pujara has also had a poor record in this ground.

Cheteshwar Pujara has played two Test matches at this ground in Cape Town so far, in which he could only score 32 runs in 4 innings. This is his third match. At the same time, Indian team’s spin bowler Ravichandran Ashwin (Ravichandran Ashwin off-spinner Team India) has scored 49 runs more than these two stalwarts by playing a Test match, combining both the innings of that match.

In the history of the Indian Test team, only Master Blaster Sachin Tendulkar (Sachin Tendulkar Capetown Test Match) has been the only player who has scored 489 runs in total 4 Test matches played at this ground in his international career.

History is witness that till date no Indian batsman has touched the 500-run mark on this ground. Apart from Sachin Tendulkar, no batsman has been able to cross the 200-run mark in the total matches played at this ground. Former Indian Test team captain Sourav Ganguly (Capetown) scored 165 runs in 2 test matches, Gautam Gambhir scored 157 runs in 1 test, Rahul Dravid scored 126 runs in 3 test matches and Mohammad Azharuddin (Mohammed Azharuddin) has scored only 124 runs in 2 matches.

Good news in a study on vaccine, the risk of infection decreases by 50% after one dose