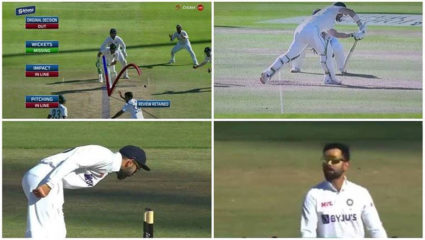 Cape Town. Indian captain Virat Kohli and his teammates lost their cool during the last 45 minutes of play on the third day of the third Test against South Africa when rival captain Dean Elgar returned to the pavilion due to a controversial DRS decision. escaped from In the 21st over of the South African innings, Ravichandran Ashwin was hit with a clear leg-barrier by Elgar but replays showed the ball was passing over the stumps.

Kohli, however, was not happy with the DRS’s decision and other Indian players also expressed their displeasure over it. The Indian players knew that their every conversation was being recorded in the stump mic. In such a situation, he used it to express his feelings. During this, an Indian player said, “The whole country is against 11 players.”

So the same other player said, “The broadcaster is here to make money.” Another Indian player said, “I hope the microphone is recording our talk.” Ashwin also couldn’t stop himself from taking a dig at the broadcaster’s ball-tracking technology, adding, “‘Supersport’ you must find better ways to win.”

To this, Kohli said, “Not only on the opposing team, pay attention to your team as well. Efforts are being made all the time to nab people.” South Africa scored 101 for two at the end of the third day’s play and are now 111 runs behind the target. The three-match series is currently tied at 1-1.

If you want to earn money from your business, then you can implement these ideas

Get ready! This digital company has made a plan to give jobs to 10 thousand people, hiring will start soon