Work on the road to prosperity is towards completion, 4 wheelers may cost more 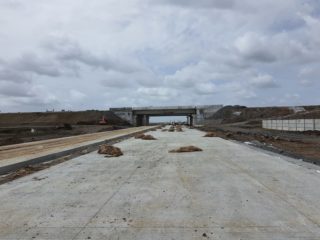 Washim. The work of road to prosperity in the district is now towards completion. There are going to be 26 toll blocks from Nagpur to Mumbai on this prosperity route. Due to which the normal passengers going on this route from 4 wheelers can get expensive. The work of Samridhi Highway, which opens the doors of prosperity of the district including Maharashtra, to cover the difference between Nagpur and Mumbai in just 7 to 8 hours, has almost reached its completion in Washim district.

It will take a few more days for this route of the district to start, due to Corona, the pace of this work had slowed down but later this work started again rapidly, although this route was to be completed in May 2021 but This work was affected due to Corona lockdown.

Mumbai-Nagpur Express Road is being constructed in Washim district with a total length of 97.23 km, in which 97 percent of the work being done in Karanja, Mangrulpeer, Malegaon and Risod tehsils till Karanja, Mangrulpeer, Shelu Bazar has been completed. Sources have told that this work is likely to be completed by the end of this month.

Balasaheb Thackeray Maharashtra Prosperity Highway This is the project of Chief Minister Uddhav Thackeray, a total of 97.23 km of this highway is being constructed from Washim district, during which the sources said that the works were affected due to the Corona crisis. But later these works have gained momentum in the district. It is likely to be completed by the end of this month.

26 toll blocks from Nagpur to Mumbai

This route is passing through 26 tehsils and 392 villages of 12 districts of the state, in which out of total 701 km distance from Nagpur to Mumbai, the route of 97.23 km is going from Washim district, through this route from Nagpur to Wardha, Amravati. , Yavatmal, Washim, Buldhana, Jalna, Aurangabad, Nashik, Thane to Mumbai altogether 26 toll nakas are being set up where toll will be deducted at the rate of Rs 1.73 per kilometer on light vehicles including cars, zips, vans.

Which can prove to be expensive for the common people who take car, zip, while traveling by railway, bus, travel is going to be less budget than traveling on this road, due to which this prosperous route made at a total cost of 55 crore rupees only. It is going to be used more in emergency only.

Symptoms of the fourth wave of corona started appearing in Pakistan, the minister said – people negligent in following SOP

IT Shares shining: TCS, Infosys and HCL shares top 52 weeks, is this the right time to book profits?