Why did it take 21 years to privatize Air India? How did the airline make a loss? Learn Full History 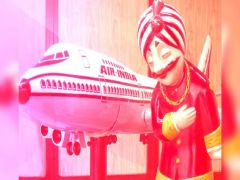 The central government has now reached the final stage in the matter of sale of Air India. It is expected that the committee headed by Home Minister Amit Shah will accept Tata Sons’ bid for the airline and it will also get approval from the Union Cabinet this week.

For the last two decades, the Indian government was trying to privatize Air India. During this, the governments changed five times at the center. Let us know how was the journey of privatization of this loss-making government airline-

Air India was not always a government company. It was started in 1932 by JRD Tata under the name “Tata Airlines”. Initially it provided weekly flight service from Karachi to Madras, which went via Ahmedabad and Bombay.

The airline flew 2,60,000 km in its first year carrying 155 passengers and 10.71 tonnes of letters. During this it made a profit of Rs 60,000. After World War II, the airline turned into a public limited company and its name was Air India.

Immediately after this, in 1948, the Government of India bought 49% stake in it. Then in 1953, the government passed the Air Corporation Act and bought a majority stake in the airline from JRD Tata.

The Government of India changed the name of the airline to Air India International and its domestic flight service was transferred to Indian Airlines as part of the restructuring.

For the next 40 years, Air India was counted among the gems of the central government and held the majority of the domestic airline’s market share.

However, in 1994, the government repealed the Air Corporation Act 1953 and allowed private companies to participate in the aviation sector. By the end of 1994-95, 6 private airlines entered the sector. These include Jet Airways, Air Sahara, Modiluft, Damania Airways, NEPC Airlines and East-West Airlines.

Air India continues to offer premium services during this period and is controlling most of the country’s international traffic. However, in the domestic market, it started losing market share to Jet Airways and Sahara Airlines. Both these airlines were not providing luxury services, but they were offering domestic flights at affordable rates, which was attracting people.

In 2000-01, the NDA government led by Atal Bihari Vajpayee tried to sell a minority stake (40 per cent) in Air India as part of fund-raising efforts. In 2000-01, the government put forward 27 state-owned companies for privatization, but none of these companies were sold that year.

Gainers & Losers: Today was a profitable Tuesday in the market, these stocks were the biggest movement

Air India was counted as a valuable asset at that time. However, its valuation and the removal of JRD Tata as the airline’s chairman were viewed with a view that the government would not tolerate any private investor interference in the affairs of Air India.

Despite the failure to privatize, Air India continued to dominate as the largest airline in the Indian aviation industry.

Aryan has to take appointment to meet father, Shahrukh had to take permission to meet son

Arrival of budget airlines, merger and second attempt at privatization (2001-2017)

In 2003, the entry of Deccan Airlines marked the beginning of the advent of low cost or in other words budget airlines in India. By 2006, Kingfisher Airlines, SpiceJet, Paramount Airlines, GoAir and Indigo started their flights. With this, Air India’s strategy of focusing on international flights instead of the domestic market began to backfire and the airline lost most of its domestic market share to these airlines.

Air India was also losing its market share in the international market as domestic private operators were collaborating with international airlines to offer connecting international flights at low cost.

Airlines from Middle East countries like Eithad, Emirates, and Gulf Air started joining hands with private domestic airlines of India and started offering flights to places like Dubai and Saudi Arabia at much lower cost.

Both the airlines had a total debt of Rs 5,000 crore. At the same time, private airlines like Kingfisher, SpiceJet and Indigo were spending a lot of money on buying new aircraft to expand their fleet.

Bulls showed their strength again in the market today, know how it can be tomorrow

The emergence of popular short-distance stop-over destinations such as Singapore, Dubai, Riyadh, Doha, Malaysia also hurt Air India as it developed its expertise in long-distance destinations.

In 2007, the Congress-led UPA government approved a plan to merge the two airlines and buy new planes at a cost of around Rs 50,000 crore.

The airline continued to pay for the ill plane until 2010, even though it did not need many of them, according to a 2011 CBI report.

Targeting Bollywood is not the motive, NCB’s main agenda is to break the drugs network: Sameer Wankhede

The airline took a huge loan for the purchase of these aircraft and on the other hand its employees started protesting against the disparity in pay. Air India could never recover from this chaos again.

Not only this, the airline has agreed to a new wage agreement for the employees and in this affair, its debt increased further. There came a time in 2011 when the airline was unable to pay salaries to its employees on time. Then the UPA government announced an equity funding of Rs 30,000 crore in the airline over the next decade.

Air India continued to lose its market share in the domestic and international market till 2017. Also, the financial burden of buying 111 aircraft and its debt from working capital loan increased from Rs 5,000 crore to Rs 50,000 crore in 10 years.

As part of Air India’s second attempt at privatization, the government directed the airline’s new owner to take its Rs 33,392 crore loan and submit bids by mid-May. The government’s intention was to complete the privatization of Air India by the end of 2018. However, no private company showed interest in buying the loss-making state-run airline.

Third attempt at privatization (2019-2021)
After two failed attempts to sell the airline, the government in January 2020 decided to sell its entire 100% stake in the airline and called for expressions of interest.

Multibagger Stock: The price of this chemical stock rose from Rs 100 to Rs 1,000 in 6 years, should you buy

Also, this time the government has reduced the debt of Rs 30,000 crore on Air India through a special purpose vehicle (SPV) to attract more and more investors.

However, the process of its privatization came to a halt due to the arrival of the Corona epidemic. In September 2021, the government received two bids for Air India. The first bid was made by Tata Group while the second bid was made by SpiceJet founder Ajay Singh on the basis of his personal capacity.

The final approval for the sale of the airline is yet to be received. However, it can be said that Air India is an attractive asset right now. It has many valuable assets including land and parking slots at London’s Heathrow Airport, a fleet of about 120 planes. Therefore, the government has fixed a reserve price of Rs 15,000 crore for the sale of Air India.

Good news for Airtel users, a free recharge of Rs 49 and double benefit for Rs 79