Violence in Lakhimpur Kheri erupted due to this statement of Minister of State for Home Ajay Mishra Teni! video viral 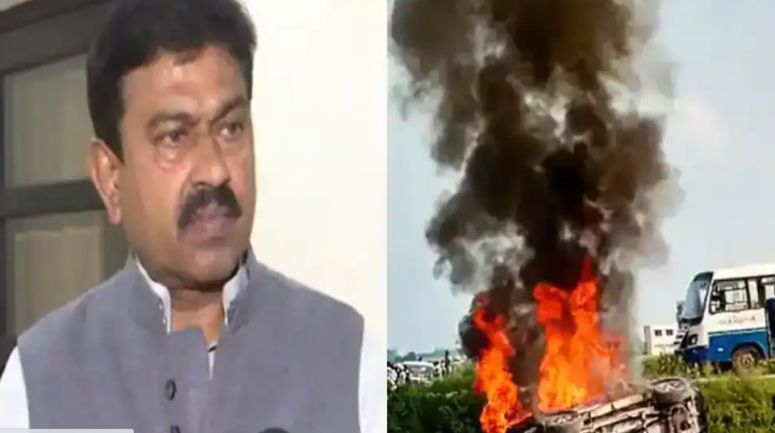 Lakhimpur Kheri Violence Live Updates: Farmers were enraged by a remark by Union Minister of State for Home Ajay Mishra Teni in Lakhimpur Kheri in Uttar Pradesh on September 25 and the protest turned violent on Sunday, in which four farmers, three BJP workers and a driver were killed. In a viral video on social media, the minister was seen talking about giving reforms to the farmers and due to this, there was anger among the farmers. Meanwhile, on Sunday, after the incident of trampling the farmers with a car, the atmosphere turned into violence.

News18 has learned that the protests first started in Lakhimpur’s Sampoornnagar area on September 25 over Ajay Mishra Teni’s remarks, when he allegedly said that farmers should reform themselves or they will have to reform themselves. This happened when black flags were shown to him by some farmers during a function. The farmers have been opposing Teni since then, who said that his statement has been distorted by the farmers.

The situation worsened on Sunday when Uttar Pradesh Deputy Chief Minister Keshav Prasad Maurya was on his way to Lakhimpur to inaugurate several government projects in the presence of Teni. From Sunday morning, farmers occupied the helipad where Maurya’s chopper was to land. The farmers claim that Teni’s son Ashish Kumar Monu was in a vehicle with armed men, when he was stopped deliberately attacking the farmers in Tikunia.

Farmers claim that four farmers died in this incident. They say that Monu managed to escape. The farmers have lodged a complaint against the minister and his son and are staging a sit-in at Agrasen Inter College in the area with four dead bodies. The farmers set both the vehicles on fire. However, the minister has said that it was an accident.

He says that BJP workers in vehicles were on their way to receive the Deputy CM, when the farmers attacked him with stones, one of the drivers got injured and the vehicle which ran over the farmers lost control. Mishra said that three BJP workers, a driver, were beaten to death by some elements involved in the farmers’ protest. There is video evidence that my son was not present near the spot in Lakhimpur Kheri.

Eight people, including four farmers, were killed in the violence that broke out in Tikoniya area of ​​Lakhimpur Kheri district on Sunday during farmers’ protest over the visit of Uttar Pradesh Deputy Chief Minister Keshav Prasad Maurya. The incident took place on the Tikonia-Banbirpur road. The opposition has targeted the government over the Lakhimpur Kheri incident.

Angry farmers torched both the vehicles after two vehicles of BJP workers who were going to bring the Deputy Chief Minister to the venue allegedly hit the protesters. Four farmers and four other people on the vehicles died in this incident. The farmers were protesting Maurya’s visit to Banbirpur, which is the native village of Union Minister of State for Home and Kheri MP Ajay Kumar Mishra.

Recharge with these Jio plans and watch Netflix for free for a month, know what is the offer

World Health Organization will reveal the secret of corona origin, experts said – WHO is not suitable for this work, agency should not be...

Bank of India Alert: This service will not work from April 21, do this work or else trouble will come