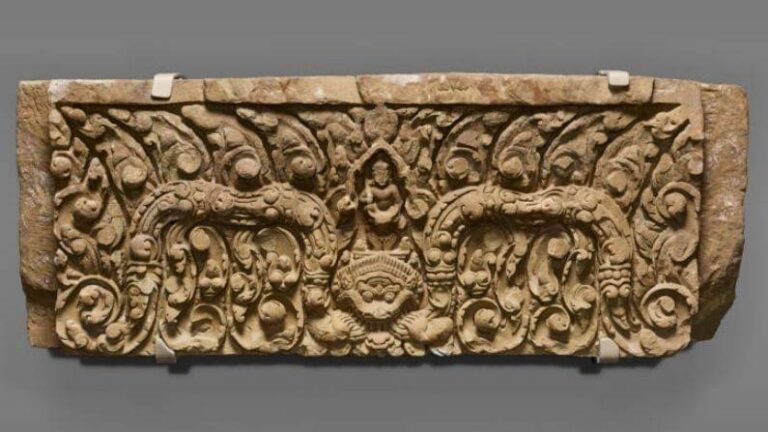 According to the Asian Art Museum, the weight of each of these remains is 680 kg. These sandstone objects belong to the 10th and 11th centuries. They were found in ancient temples in northeast Thailand.

Stone lintels to be returned to Thailand (Photo Credit-Kevin Candland)

A museum in America has returned a couple of 1000 years old religious relics to Thailand after more than five decades. These remains were illegally brought from Thailand. Stone lintels were housed in the San Francisco’s Asian Art Museum from the 1960s. But the city handed these artifacts back to Thailand authorities at a ceremony in Los Angeles on Tuesday.

According to the Asian Art Museum, the weight of each of these remains is 680 kg. These sandstone objects belong to the 10th and 11th centuries. They were found in ancient temples in northeast Thailand. Avery Brundage, former president of the International Olympic Committee and an ardent collector of Asian art, came to America with these relics in the 1960s. However, in 2017, the Department of Justice found out that these items were illegally brought from Thailand. The Embassy of Thailand, based in Washington DC, said these items were exported illegally during the Vietnam War of the 60s.

The museum said in September 2020 that they would return these items voluntarily. However, even after this, the American authorities filed a civil complaint and demanded that these items be in their possession. At the same time, an agreement was reached with the city of San Francisco in February regarding these religious items. In a statement, the Embassy of Thailand said, “The return of these religious relics to the government of Thailand and the people of Thailand holds great importance in the context of history, archeology and culture.” Robert Mintz, deputy director of the Asian Art Museum, also welcomed the return of these items.

There are some controversies about lintels as well

However, even after agreeing to return the religious relics, the museum feels that the US authorities have not yet presented concrete evidence to prove that they were brought illegally. In an earlier statement, the museum said its own study found no evidence that these lintels were brought from their sites, contrary to Thailand’s laws. Mintz said that one of these lintels was donated by Brundage, while the other was purchased. However, due to insufficient evidence of this, the matter cooled down.

Also read: NASA will adopt this method to find out ‘how much dust on the moon’, will help in fighting air pollution

Medical stores will have to account for self kit, BMC issued strict instructions

Mumbai: BMC is facing difficulty in getting accurate figures of Corona patients being found daily…

22,270 new cases of corona were reported in the country within 24 hours, 325 people died; Positivity rate reached below 2 percent

Representative Photo new Delhi: Due to 22,270 more people being found infected with the corona…