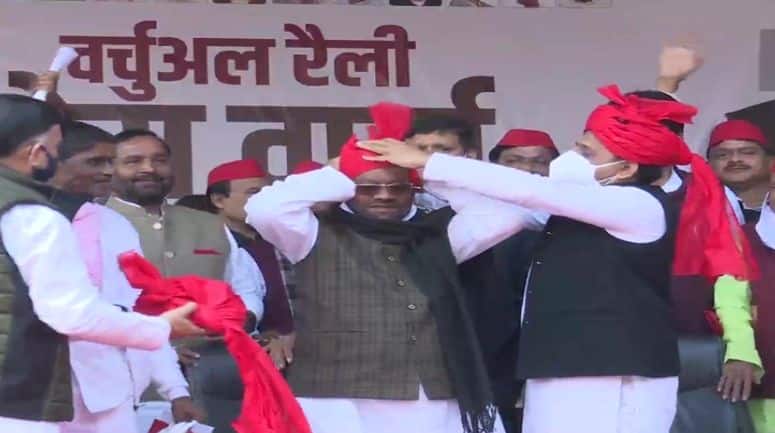 UP Elections 2022: Swami Prasad Maurya, who resigned in revolt from the Bharatiya Janata Party (BJP)-led Yogi Adityanath government in Uttar Pradesh, on Friday joined the party in the presence of Samajwadi Party President Akhilesh Yadav along with some former ministers in Lucknow. accepted. BJP MLAs who had earlier tendered their resignations also joined the Samajwadi Party at the party office in the presence of SP chief Akhilesh Yadav.

Apart from Swami Prasad Maurya, other ministers who went to SP’s side were also Dharam Singh Saini. However, another minister Dara Singh Chauhan, who resigned from the BJP government, did not appear in the program of SP today. In the program organized at the Samajwadi Party office, Maurya said that in the upcoming elections, he will clean the BJP from UP.

Most of these MLAs had joined the BJP from the Bahujan Samaj Party before the 2017 elections in Uttar Pradesh. Some BJP leaders claim that it is the MLAs who know that this time they will not be given an assembly ticket.

During this, Samajwadi Party President Akhilesh Yadav attacked the BJP and said that he is finding it difficult to get even 20 percent seats in UP. Akhilesh took a dig at Chief Minister Yogi Adityanath and said that by ’80 vs 20′ he meant that BJP would get 20 per cent seats in Uttar Pradesh elections, while the rest 80 per cent would go to SP, but seeing today’s crowd it seems Now it will be difficult for them to get that too.

Addressing the people after former minister Swami Prasad Maurya and other BJP MLAs joined the Samajwadi Party, he said that Maurya’s arrival has strengthened the party. He said that a few days ago we had said that the Chief Minister will have to hire a teacher of mathematics, who are talking about 80 and 20. 80 percent of the people have already stood with the Samajwadi Party, those who would have seen the stage today, would have listened to Swami Prasad Maurya, it seems that even 20 percent would have turned against him.

Registration for vaccine not happening even after 4 pm on Kovin portal, people are not getting OTP

Apple’s iOS device may crash, this bug can become a problem