UP Assembly Elections 2022: In the first phase, the challenge before the BJP to repeat its previous performance 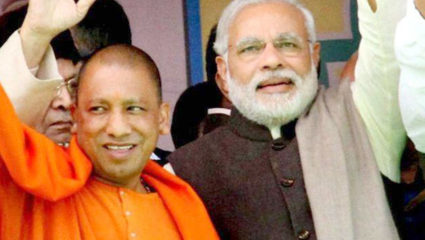 Lucknow: The first phase of elections is going to be very challenging for the Bharatiya Janata Party (BJP), which is giving the slogan “Ok bar again three hundred paar” in the elections for the Uttar Pradesh Assembly Election 2022. Voting is to be held in 58 seats under the first phase on February 10 and in the 2017 elections, the BJP had won 53 of these seats.

Polling will be held in 58 assembly seats in Shamli, Meerut, Muzaffarnagar, Baghpat, Hapur, Gautam Budh Nagar, Ghaziabad, Bulandshahr, Mathura, Agra and Aligarh districts in the first phase of the seven-phased Uttar Pradesh Assembly elections. The first phase notification will be issued on Friday, January 14, after which the nomination of candidates will start. The ruling party has a big challenge to repeat its past performance in this region. In these 58 seats, last time Samajwadi Party and Bahujan Samaj Party won two seats each and Rashtriya Lok Dal won one seat.

In the last assembly elections in the state, the BJP had won 325 seats, including allies, out of 403 seats, while the SP got 47, the BSP 19 and the Congress seven. BJP’s ally Apna Dal (S) won nine seats and SubhaSP four. This area of ​​the first phase is considered to be the area of ​​​​effect of farmers agitating against the three agricultural laws. Apart from farmers in the elections, the alleged exodus of a community from Kairana, sugarcane and Lord Krishna are likely to be tried.

All opposition parties including SP, Congress and BSP have given priority to the issues of farmers here. The ruling BJP claims that the Yogi Adityanath-led government has done several important works for the development of the region, including the payment of dues of farmers in the sugarcane-dominated region, ending migration from Kairana and the proposed international airport in Noida. If we look at the recent agitations in the area, in the first week of September last year in Muzaffarnagar, there was a big mahapanchayat of farmers against three agricultural laws and in which Rakesh Tikait, National Spokesperson of Bharatiya Kisan Union, in addition to the harassment of farmers, Prime Minister Narendra Modi and Chief Minister Yogi Adityanath was accused of rioting.

It is worth noting that after the communal riots in Muzaffarnagar in 2013, challenges had arisen for the SP in this stronghold of western Uttar Pradesh and the BJP benefited from it in the 2014 Lok Sabha elections, 2017 assembly elections and the 2019 Lok Sabha elections. From the Chief Minister to the top BJP leaders, claim that there was not a single riot in Uttar Pradesh after the formation of the BJP government in 2017. Senior journalist and political commentator Rajeev Ranjan Singh said in a conversation with ‘PTI-Bhasha’, “This time the election will be very interesting in a war of words, because due to the COVID epidemic, if rallies, public meetings will not be allowed, then people on social media will share this message.” Will use all kinds of slogans and statements that will create a stir. ,

Even before the notification for the first phase of elections was issued, Uttar Pradesh government’s Labor and Employment Minister Swami Prasad Maurya resigned from the minister’s post, accusing the BJP government of neglecting the Dalits, backward, youth, farmers, unemployed and the underprivileged. . A day after Maurya’s resignation, Forest Minister Dara Singh Chauhan also resigned. Enthused by this, the SP claims that in the first phase itself, the cycle of SP will move rapidly towards the destination of power.

SP chief spokesperson and former minister Rajendra Chaudhary alleged that the BJP government imposed black agricultural laws without listening to the farmers and took them back after a year. But more than seven hundred farmers lost their lives. Farmers will take account of this from the BJP government. This time SP will get historic support and seats.” Along with enumerating the achievements of development in western Uttar Pradesh, Chief Minister Yogi Adityanath often claims in his meetings that he has freed Kairana from the mafia and the families of the fleeing have returned to their homes.

The Chief Minister also counts the payment of sugarcane farmers among the achievements of the government. The BJP had raised the issue of migration from Kairana in Shamli district of the same region under the SP government and the late BJP MP Hukum Singh had raised it in the Lok Sabha as well.

Mathura is the birthplace of Lord Krishna in this region of the west. Deputy Chief Minister Keshav Prasad Maurya had tweeted in early December last year: “Ayodhya Kashi grand temple construction underway – Mathura is ready.” After this, all the political parties, including the SP, accused the BJP of polarizing the Hindutva agenda. Later Akhilesh Yadav tried to give it a new twist and said that Lord Shri Krishna comes every day in his dream and says that Samajwadi Party government will be formed in 2022. After this statement of Yadav, BJP leaders retaliated fiercely on him.

BJP state spokesperson Harishchandra Srivastava said in a conversation with ‘PTI-Bhasha’, “Western Uttar Pradesh is a big belt of sugarcane farmers for whom the Yogi government has paid one lakh 55 thousand crore rupees, it is historic. Once there was a mafia rule in Kairana and the people there were fleeing under the shadow of terror. Today Kairana is free from mafia, people who are migrating have returned. These are many big reasons which will become the reason for BJP’s big victory.

On the resignation of State Government Minister Swami Prasad Maurya, he said that many times when people take decisions due to vested interests, they often make superficial and light allegations and the public understands this very well.

The Rashtriya Lok Dal (RLD), a party allied with former prime minister Chaudhary Charan Singh in western Uttar Pradesh, also has a good influence. RLD didn’t have any compromise with anyone last time. Apart from RLD, this time SP has tied up with Mahan Dal led by Keshav Dev Maurya, who is active in western UP. (agency)

Enjoy the Spider Man movie content in the next update of Battlegrounds Mobile India!

9 years of Nirbhaya case: On December 16, the girl was vandalized in a moving bus, the incident shook the whole country