Unseasonal rain exposed the administration; People were troubled by waterlogging, jam at places 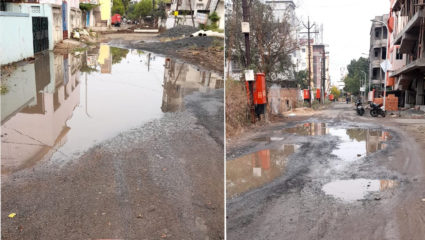 Nagpur. In the winter season, the first Monday of the week was welcomed by the weather with rain. About half an hour of rain exposed the maintenance done on the roads of the city. Waterlogging was seen on the roads in many areas including the palace. Due to this, the residents of the city were troubled by the jam in many areas along with Sitabardi and Cotton Market including the medical intersection. In such a situation, where were the traffic signals of many intersections going to be behind. Signals from Swami Vivekananda Chowk to Sitabardi and Medical Chowk to Mahal, Gandhibagh Ughan, Itwari, RBI Chowk continued to play blindly. In many places the signals worked properly and at some places the lights went off.

Apart from the medical crossroads, there was a dire situation of traffic jams around the palace and agricultural university. Ambulances were also seen getting stuck in them. When the traffic jawans were seen missing, the common man managed the duty and somehow got the way for the ambulance. This incident was at 6.20 pm at Medical Chowk. Seeing the dark clouds, Mahavitaran also cut off the electricity in many areas. However, as soon as the rain stopped, the power system was restored. The people who set up shop along the roadside, along with them, were forced by the rain to move away from the place for some time.

The breakfast shops got the most benefit from the rain. After the rain on Monday, suddenly the demand for curry samosas along with other spicy items increased. Most of the shops saw a huge crowd of people for a quick breakfast. Some were packing and taking breakfast, while some were seen enjoying samosas at the shop itself. Due to the coolness of the rain in the evening, the demand for tea also increased significantly. Most people enjoy hot and spicy samosas with tea. According to the shopkeepers, although there is a demand for hot snacks in winter, but when it rains, this demand doubles.

market decorated in the evening

During the day, the palace with Sitabardi, along with Itwari, the clothing retail market in Gandhibagh were stalled for some time during the day due to rain. The shopkeepers said that in view of the rain, it seemed that this process of rain would continue till the night, but after the end of the day itself, the market was decorated again after 5 pm. People also shopped without caring about the Corona guide line. Most of the people in the market were seen doing business without masks.

Paytm may hit record lows, Macquarie India cuts target by up to 25%