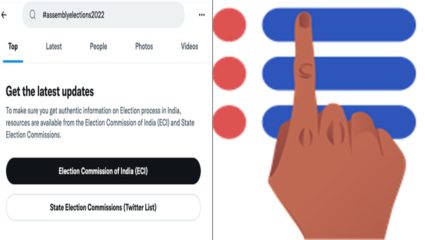 New Delhi: Twitter on Thursday announced a slew of information-related steps to give citizens accurate information before casting their vote in the upcoming assembly elections in five states. Assembly elections in Uttar Pradesh, Uttarakhand, Punjab, Manipur and Goa will be held in seven phases from February 10 to March 7 and counting of votes will take place on March 10. Altogether 690 assembly seats will go to polls and 18.3 crore people, including 8.5 crore women, will be eligible to vote in the five states.

“When elections are held, people turn to Twitter to find credible information about voting, learn about candidates and their manifestos, and engage in healthy civic discussion and conversation,” Twitter said in a statement. As a service for public conversation, Twitter is committed to enabling people to make the right decisions while exercising their civil rights.”

Twitter’s move, powered by the open internet, is focused not only on ensuring high turnout, but will also help ensure that voters are involved and informed throughout the election cycle. Twitter will also introduce a proper emoji to help voters. In addition, a voter education quiz will engage people in question-and-answer sessions while making them aware of essential facts about the election, the statement said.

Twitter said it has launched a ‘Search Prompt’ in collaboration with the Election Commission of India and Chief Electoral Officers to make it easier to find reliable and authoritative information for assembly elections. It said that when people search with related keywords on Twitter’s Explore page, this ‘search prompt’ will provide reliable, authoritative sources of information and it will lead people to resources where they can find candidate lists, polling dates, polling stations and more. You will be able to get reliable information about other things.

Apart from English, this ‘Search Prompt’ will be available ,, Punjabi and Konkani and will have multiple hashtags. In addition, Twitter will organize workshops and training sessions for nonprofits in five states aimed at combating misinformation related to elections. Payal Kamat, Public Policy Manager, Twitter India, said the company is working in partnership with officials, including the Election Commission of India, to harness the power of the open internet to strengthen citizen dialogue and encourage quality participation this election season. Will continue to do (agency)

Reliance out of North America’s shale gas business, due to this all assets sold in the last six years

Knock on the nape under the leadership of Congress, the administration should immediately remove the problem of the road, the request of the citizens

Economic Survey 2020-21: Suggestion of change in weightage of food products to show correct picture of inflation