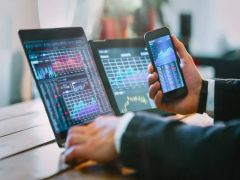 On October 8, for the second consecutive week, the market had managed to close rapidly. Reliance Industries, IT, PSU banks and select auto stocks saw buying on the last trading day after the RBI policy remained soft. BSE Sensex closed at 60,059.06 with a gain of 381.23 points. At the same time, with a gain of 104.90 points, it closed at the level of 17,895.20. It formed a small bullish candle matching the Doji pattern formation on the daily chart. Nifty had formed a bullish candle with a gain of 2 per cent on the weekly scale.

Shrikant Chauhan of Kotak Securities Says that technically the index has once again taken support near its 20-day SMA (simple moving average) and has seen a sharp bounce back. It has also maintained higher bottom series formation which is supporting a short term uptrend. We believe that the Daily and Intraday chart structure is positive and will remain positive in the near term as well.

He further said that support is visible at 17,800 for the positional traders. If Nifty stays above it, then we can see the level of 18100-18300 in it. On the other hand, if Nifty slips below 17,800, then we can see it sliding towards 17600-17500. Volatility is likely to remain in the market. In such a situation, level based trading with strict stoploss would be a better strategy for positional traders.

iPhone 13 Series: Know every detail before launch, from price to features revealed

You can start a good brand with pickle business