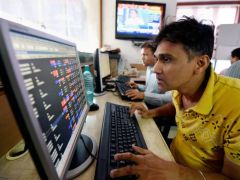 On October 5, another strong trading session was witnessed in the market. Benchmark indices were seen making up for the losses of the previous trading sessions. IT, select banks, financial and auto stocks supported the market. BSE Sensex closed at 59,744.88 with a gain of 445.56 points yesterday. At the same time, Nifty50 closed 131 points higher at 17,822.30 and formed a bullish candle on the daily chart for the second consecutive day.

Shrikant Chauhan of Kotak Securities says that despite the poor global cues, there is enthusiasm and hope in the market before the results season. Based on the previous reversal formation, the index has formed an Uptrend Continuation Formation on the Daily Chart. At the same time, promising higher high and higher low series formation has been made on the intraday chart, which is a sign of further bullishness.

He further said that for the traders following the trend, support is visible at 17,750. If Nifty manages to stay above it, then this rally can go up to 17,880-17,900. On the other hand, if the Nifty slips below 17,750, the level of 17,710 can be seen. The broader market also continued to rally during the period. Yesterday the Nifty Mid and Smallcap 100 indices closed with a gain of 0.4 per cent.

Analysts also have confidence in this Tata stock with Rakesh Jhunjhunawala’s portfolio, what do you have?

These include the names of Grasim, ICICIGI, Kotak Bank, HDFC AMC, Dabur and Balkrishna Industries. A high delivery percentage indicates that investors are showing interest in those stocks.

Only one stock on NSE on 4th October NALCO F&O is under ban. It is to be noted that the stocks included in the F&O segment are put in the ban category if the positions of the securities exceed their market wide position limits.

This smartwatch of DIZO will run for 12 days on a single charge, can be brought home on August 6 for just Rs 2,999