Thousands of Rohingyas protest in Bangladesh, throw stones at police, refuse to stay on Bhasan Island 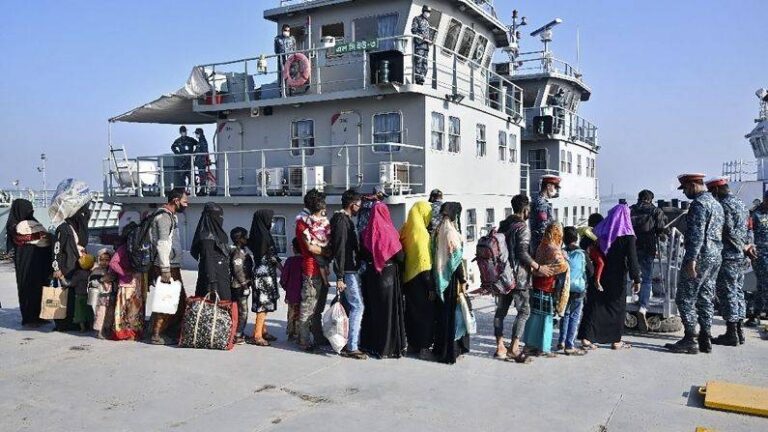 The police officer said, ‘They (Rohingya Refugees) threw glass of the godowns while throwing stones. They have come to the police station, their only demand is that they do not want to stay here.

Rohingya Refugees Protest Over Living Conditions on Bangladesh Island: Thousands of Rohingya refugees fleeing Myanmar on Monday protested against the Bangladesh government. These people say that they have been taken out of caps and sent to an island where the conditions are not good to live (Rohingya Protest). Police has given this information (Bhashan Char Bangladesh). In fact, millions of Rohingya refugees live in Bangladesh’s Cox’s Bazar. The government had sent over-filled refugees in Cox’s Bazar caps to Bhasan Char Island. The government has planned to bring one lakh people here, since December 18 thousand people have come here.

It is that piece of land that is situated in the middle of the sea (Bhashan Char Island Location). Most of the Rohingyas came from the Myanmar army to save their lives in 2017. The United Nations called the Myanmar army’s attacks a ‘racial genocide’. According to the police, about 4 thousand people have protested on Monday. At the same time, it has demanded that officials of the United Nations Refugee Agency should visit here. Local police chief Alamgir Hussain said, ‘Rohingya living here have become uncontrolled (Bhashan Char Rohingya Camp). Today UNHCR representatives come by helicopter.

The police officer said, ‘They threw glass of the godowns while throwing stones. They have come to the police station, their only demand is that they do not want to stay here. A Rohingya refugee while talking to news agency AFP said that yes, the police were thrown bricks because she was blocking us from entering the building where UN officials were present (Bhashan Char Island in Hindi). For the first time in December, a large number of people were brought to this island located somewhere in the Bay of Bengal.

According to AFP, Rohingyas say that they are beaten and threatened to go elsewhere from here. Human rights groups respond to such claims (Bhashan Char Island Bangladesh). But the government of Bangladesh rejects them. The government says that this island is completely safe and the living conditions here are much better than the caps of the Cox’s Bazar. However, in the case the United Nations says that it is not involved in this process.

Health department’s help will be taken, police is engaged in investigation in abortion case

Wardha. On the basis of the complaint of the Health Department in Arvi’s Kadam Hospital…

Europe 'one step away' from radiation disaster at Zaporizhzhia nuclear plant

These two color options will be available in Xiaomi 11i HyperCharge! Design like Redmi Note 11 Pro+

The common value of a house jumped by £3,301 this month, concurrently Rightmove noticed double…