Thousands of jobs – lakhs of wishes: 2022 is bringing a new beginning for the youth of Madhya Pradesh 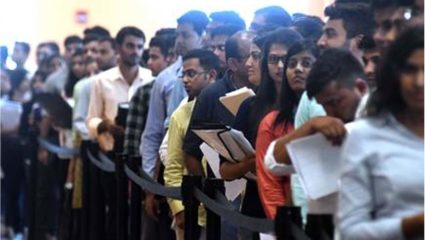 The lockdown has hit the Indian economy for the last 18 months and it has clearly had an impact on employment. According to estimates by the Center for Monitoring Indian Economy (CMIE), the unemployment rate in India rose to 7.9 per cent in December 2021, from 7 per cent in November.

In India, over six million salaried people lost their jobs in November due to Covid. Not only this, the Indian economy is suffering from an increase in the unemployment rate combined with an inflation rate of around 5 percent. Unlike the United States and other countries, where massive resignations are revolutionizing the jobs market, a country with a large population like India faces job pressure.

In 2019-20, India employed 408.9 million people, but that number has come down to 406 million since the pandemic. And that doesn’t bode well for a country where 1/5 of the world’s youth live, and where the largest work force is youth. To accommodate such a large workforce, the country has to create viable employment opportunities for its youth.

The situation in Madhya Pradesh is also worrying in terms of employment. According to the Economic Survey report for 2020-21, the state has registered more than 3 million unemployed people. It is estimated that between 2016 and 2026 there will be 0.4 million people in the 15-29 age group and another 7.2 million in the 30-59 age group. With more than half the population still under 30 in 2026, Madhya Pradesh can take advantage of its youth population by investing in its youth and increasing their employability.

Madhya Pradesh Chief Minister Shivraj Singh Chouhan is focusing on employment generation opportunities for the youth. He has constituted a special committee to promote industrial investment and is meeting investors regularly in Madhya Pradesh. The state government is taking steps to organize employment fairs in every district and self-employment schemes are being run, such as “Udyam Kranti Yojana” which will provide loans ranging from one to fifty lakh rupees, out of which 3% interest subsidy is given by the government. Will go

On January 12, CM Chouhan has planned a statewide employment campaign with an aim to provide employment to about 3 lakh youth under the employment fair. This step has been taken by the government in view of the rapid industrial development and upcoming schemes in the state. In the same line of industrial development is the Bandar Diamond Project of Chhatarpur, in addition to providing employment opportunities to thousands of local youth in Bundelkhand region. It has the potential to contribute about Rs 40,000 crore to the exchequer and economic activities.

Rich in natural resources, fuels, minerals, agriculture and biodiversity, our private participation in the development of Madhya Pradesh is important for the state’s economy. Madhya Pradesh is rich in minerals, having remarkable deposits of coal, manganese, limestone, diamond, gold and copper. The Madhya Pradesh government has recently invited tenders for auctioning 21 mining blocks of such minerals.

Auto News Bulletin: From Maruti WagonR becoming the best-selling car in April to Tesla’s statement, the big news of the auto world

Are 100 million Indian users really going to get free internet from the government?