The work of Kharegaon railway flyover is yet to come, the date of inauguration is also uncertain 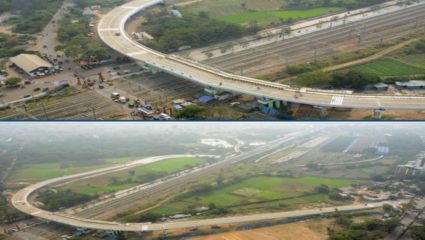 Thane: The Thane Municipal Corporation had assured the Railway Department that the flyover near Kharegaon Gate connecting Kalwa East and West would be opened on December 25. But, even after the beginning of the new year, the date of inauguration of this bridge has not been decided yet. Although the Municipal Administration had earlier claimed that the work of the bridge has been completed. It is now learned that it will take another eight days to complete the final work. In such a situation, it is now being expected to be opened during Republic Day.

The construction work of Kharegaon flyover is going on through the Central Railway Administration and Thane Municipal Corporation near the railway gate in the Kharegaon complex of Kalwa. The local MP here, Dr. Shrikant Shinde himself had assured that the bridge would be reopened on December 20. After this the date was extended to 25 December. Meanwhile, the Railway Department had also given a letter to the Municipal Administration regarding the opening of the flyover bridge soon after closing the railway gate. After this, the municipal administration had assured to open it soon.

Now the municipal administration says that there will be a safety audit from the railway side and it is also being checked whether the railway can go from here? And what could be the problem during this. Along with this, the capacity of the bridge will also be checked. Thereafter the bridge will be opened for traffic after handover. On the other hand, Thane Municipal Corporation says that light and other small works are yet to be done on this bridge. Because there will be eight more days for that work, after that the representative of the municipality will fix the date.

Minor work on Kharegaon Railway flyover is pending and will be completed in eight days. After that the officials of the Municipality will decide regarding the release.

Who will inaugurate the bridge?

At the same time, there is confusion regarding the release of this moment. Because Shiv Sena has claimed that it is because of us that the work of this bridge has started. And MP Shrikant Shinde says that it will be inaugurated by the foster minister of Thane district Eknath Shinde. On the other hand, MLA Jitendra Awhad has claimed that the bridge will be inaugurated by NCP State President Jayant Patil as NCP had first demanded the construction of this bridge and then MP Anand Paranjpe by correspondence through the Railways.

Sameer Wankhede in no mood to take extension in NCB, term ending on December 31