The much awaited flying pool at Kharegaon finally opened 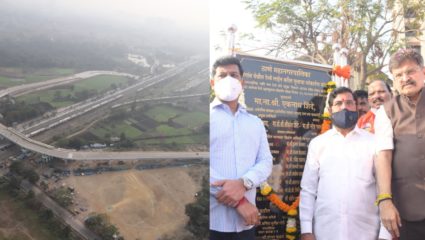 Thane: The much-awaited flyover at Kharegaon, connecting Kalwa East and West, finally began on Saturday. During the opening of the pool, the fierce competition for the credit came to the fore. The pool was inaugurated by the district’s foster minister, State Urban Development Minister Eknath Shinde, at that time Home Construction Minister Jitendra Awhad was present on the stage.

In the presence of ministers, there was a fierce clash between the supporters of both Shiv Sena and NCP. From NCP, Jitendra Awhad went ahead and from Shiv Sena, the announcement was going on in support of Eknath Shinde. Both the ministers showed their emphasis in the speech and indirectly attacked each other literally but kept the word limit.

Home Construction Minister and local MLA Jitendra Awhad, in his address, described Eknath Shinde and his friendship beyond politics and said that there is an innocence in the said relationship. Awhad pointed to Shrikant Shinde and talked about working together. On the other hand, Eknath Shinde said that it is true that he and Awhad have a friendship which is like an open book. What happens in our mouth also happens in our stomach. During elections, we work for our own party, after the election the protest ends. Shinde further said that even though Shiv Sena has power in the Municipal Corporation, he never did politics regarding the work of the people. Even though we have opposed each other on issues but never stabbed below the waist, it is not in our blood. With the commissioning of the Udaan Pool, Thanekars will get relief from heavy traffic jams. 23 crore 34 lakh 8 thousand has been spent on the construction of this 703 meter long bridge. The Kharegaon gate was used by the local people to travel from East to West in Kalwa. Several civilians have lost their lives in a train accident that occurred while crossing the gate. In view of this, a flying pool was constructed at the said site.

Be Chanakya, don’t be Naradamuni

At this time, Awhad also took a dig at Mayor Naresh Mhaske and said that you are Chanakya in politics. Therefore, Chanakya advised to remain and not to become Narad Muni. While Eknath Shinde while advising the opposition leader Ashraf Sanu Pathan to follow the religion of Aghadi, he said that he never stopped from implementing the ‘Wagle Mission’, so if the NCP wants to implement its mission, we will never stop. Shinde said that Shiv Sena implemented Kalwa Mission only to increase the corporators of Mahavikas Aghadi. At the same time, Shinde said that he has never done commission politics and has never asked the Municipal Corporation to approve his file. But criticizing someone personally is unfair and NCP should be careful while criticizing. At the same time, he also advised his MP son Dr. Shrikant Shinde not to make such statements which would hurt other people.

High voltage drama between workers of both sides

A huge high voltage drama started after NCP workers hoisted the banner of the flyover. In no time, this argument did not stop at the hoisting of the banner but turned into a confrontation. The workers of both the sides clashed saying that we played an important role in the construction of the bridge by correspondence and the banner is yours, it is wrong. There was a heated argument, especially among the corporators. During this, there was a war of words between Shiv Sena corporator Umesh Patil and NCP corporator Mahesh Salvi. In fact, NCP and Shiv Sena workers looked aggressive before the program started in the presence of Jitendra Awhad and Eknath Shinde. This is not the first time that the workers of Mahavikas Aghadi have come face to face. Even before this, several times there have been fights between the workers of both the parties.

Stan Swamy, arrested in the Elgar Parishad case, died, many opposition leaders said, the center is responsible for this murder

PM Modi to launch COVID 19 vaccination campaign on January 16, how much will be vaccinated on the first day; Know full details

Afghan War: America will drive out the Afghans who help the American army, the government is fully prepared