The agitation continued even on the fourth day, the administration is not taking care of the demands of Sambhaji Brigade, fury against Uttam Galva 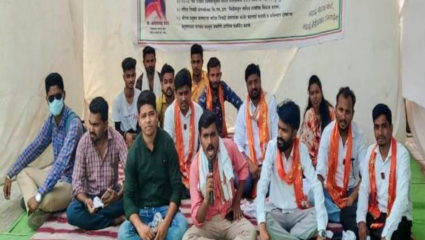 Wardha. Sambhaji Brigade has started a sit-in movement in the Mahatma Gandhi Statue complex demanding proper compensation and justice to the local landowners who were affected by the Uttam Galva Company located in Bhugaon, adjacent to the city. In this situation, Tushar Umale, the state organizer of Sambhaji Brigade, has warned to intensify the above indefinite strike movement.

Otherwise warned to intensify the movement

According to the memorandum submitted to the District Magistrate, due to the toxic fumes emanating from Uttam Galva Company, there is heavy loss of agricultural crops in the premises of Bhugaon, Barbadi, Injhapur, Chitoda, Mandavgad, Selukate, Ashta, Dhanora, Nandora, Borgaon Meghe premises. The farmers are getting into financial trouble due to the smoke coming out of the company and the water of the wells of the campus is getting spoiled due to the contaminated water.

The above water is used for irrigation and drinking, due to which crops are being destroyed along with public health, the health of the citizens of the campus is getting affected badly. It is worth mentioning that the same people whose land, water, health have been affected by the company have also been deprived of employment.

Other demands including compensation placed before the company

According to the government decision of 2008, it is necessary to give 80 percent jobs in local industries to Bhumiputras, but the company management has flouted these rules, there are a large number of engineering, polytechnic, ITI or graduates in Wardha district, hundreds of youth, who are not getting jobs here in Mumbai, The Sambhaji Brigade has demanded that these youths going to cities like Pune should take strict action on the three companies causing severe pollution, control the increasing pollution, provide compensation to the farmers, families of all the above villages. Sambhaji Brigade has demanded to provide permanent job to a member of the Bhoomiputras, to give justice to the sons of Bhoomi, Uttam Galva Metaliks Limited, Uttam Value, Indrajit Power Plant companies to develop the disrupted villages with CSR funds.

Unemployed people of the area also joined the movement

10 key games on the 2022-23 Chicago Bulls schedule, including a January matchup against the Detroit Pistons in Paris

Islamabad: Former Chief Justice of Pakistan Gulzar Ahmed was on Monday nominated for the post…

Important news for SBI customers! Changes in the rules of cash withdrawal and check book going to happen from July 1, know full details