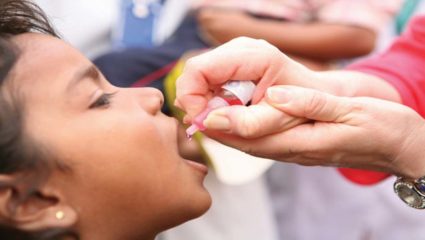 Aurangabad : On February 27, on the orders of the Central and State Government, Pulse Polio Campaign will be run in Aurangabad under the National Pulse Polio Immunization Campaign. Under the campaign, a target has been set to give polio dose to 1 lakh 98 thousand 614 children in the age group of 0 to 5 years in the Municipal Corporation area of ​​Aurangabad. For this, 661 pulse polio booths will be functional in the city. This information was given by the Chief Medical Officer of Municipal Corporation Dr. Paras Mandlecha and Additional Commissioner BB Nemane in a press conference.

He said that not a single polio patient has been found in Aurangabad city since 1999. Despite India being completely free from polio, this disease has not been eradicated from the whole world. Due to the presence of polio patients in some countries, due to the spread of its virus in the country, polio patients are not found, so the pulse polio immunization campaign is being run at the national level on 27 February. Polio dose will be administered to all children below the age of zero to 5 years from 8 am to 5 pm on February 27. To make the campaign successful, the Municipal Corporation has appointed 45 Medical Officers, 1950 Employees, 130 Supervisors, 38 Controlling Officers and 9 Controlling Officers.

Dr. Paras Mandlecha informed that under the National Pulse Polio Campaign, public awareness of the campaign is going on in every work area of ​​the city through loudspeakers installed on garbage collection rickshaws of Ghanchkara Department, Municipal Corporation. Also ward no. Pulse Polio campaign is being promoted and disseminated through posters, banners, hoardings etc. in all the health centers/hospitals under 1 to 9. Along with this, correspondence has been done at the railway station, bus station, airport regarding the allocation of 24-hour pulse polio vaccination campaign. Dr. Paras Mandlecha informed that the children who will be deprived of polio dose on February 27, will be given polio doses from door to door for the next 5 days. In the end, he told that in this campaign, 123 such places like railway stations, bus stations, airports, toll nakas, malls, transit teams to provide polio doses to children and 28 mobile teams for children selling brick kilns, kundyas etc. polio doses. Feeding has been arranged.

Corona scared even after vaccination, cases of COVID-19 in America increased from 11,000 to one lakh daily

According to the CDC, these have increased by 30 percent in a week. These figures…

Stocks in Focus: During trading today, the focus will be on stocks like Reliance, SBI…

With new team and improved health, Ravens’ Jason Pierre-Paul eager to get back on the field