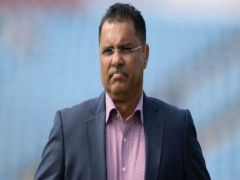 Former Pakistan fast bowler Waqar Younis on Wednesday apologized for his communal remarks made during a television program after Pakistan’s 10-wicket win over India during the T20 World Cup. Waqar, who said that during the India-Pakistan match, Pakistani batsman Mohammad Rizwan reading Namaz at the ground, has now apologized.

The former Pakistani fast bowler was heavily criticized on social media for his jihadi mindset. Waqar not only talked about this match on a sports channel but also discussed the opener Mohammad Rizwan offering Namaz on the field during the break in the Pakistani innings.

He said that I liked what Rizwan did. He offered namaz standing among the Hindus. It was a very special thing for me. Waqar’s remarks drew strong reactions in both the countries and former India fast bowler Venkatesh Prasad reprimanded him for it.

Venkatesh Prasad tweeted, “Jihadi mentality reaches a different level by talking like this in sports. What a shameless person After the criticism on social media, Waqar apologized when he realized his mistake.

Waqar tweeted that in those moments of excitement, I said something which was not meant to hurt the sentiments of the people. I apologize for this. That was not my intention at all, it is actually a mistake. Sport unites people regardless of caste, color or religion. He even apologized on that channel.

Waqar said that commenting on religious matters is something I never do, as I respect everyone’s religion. I said something very enthusiastically at that time and I did not mean to hurt the sentiments of Hindus in Pakistan, India and anywhere in the world.

He said that I was very excited after Pakistan’s victory and said all this in the same flow. I apologize for this. Noted cricket analyst Harsha Bhogle also expressed dismay at Waqar’s remarks.

Bhogle tweeted that it is very disappointing for a person like Waqar to say that Rizwan offering Namaz in front of Hindus was very special for him. Many of us try to ignore such things and talk about sports and it is heartbreaking to hear such a thing.

Mann Ki Baat: PM Modi said- Second wave of Coroni rocked the country, appealed people not to get caught in the rumor of vaccine