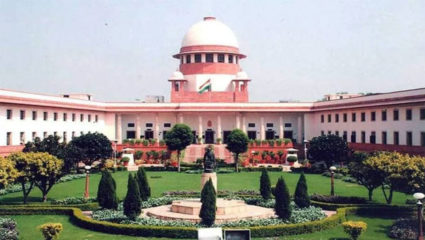 New Delhi. The Supreme Court on Monday dismissed a writ petition filed by a group of six students alleging that their NEET-UG answer sheets were tampered with and tampered with by the examination-conducting National Examination Agency. A bench of Justices DY Chandrachud and AS Bopanna took on record the submission of the National Testing Agency (NTA) that after complaints were made by the students, they were called to its office and were shown their original answer sheets and they Admitted that it was his answer sheets.

The bench noted that the original answer sheet was signed by the students and invigilators and hence it cannot be said that NTA was involved in any tampering or manipulation of marks. Dismissing the petition, the bench said, “Prima facie it cannot be said that any act of tampering or manipulation was done in the office of the National Examination Agency. 15.44 lakh candidates have appeared for the examination, out of which six have appeared in this court. Five have verified their OMR sheets shown to them.”

The bench took note of the submission of advocate Rupesh Kumar, appearing for NTA, that there is only one answer sheet per candidate which is OMR sheet and is available in their server. Kumar said that as per the procedure, a copy of the answer sheet was sent to all the candidates on their registered email ids, including six candidates who have approached the court stating that they have not received it.

“Those OMR sheets can be verified only by touching, which we were not allowed to,” he said. The bench, however, refused to agree with his contention and said that it was dismissing the petition.

Income of farmers will be doubled! Farmer welfare mission started in UP; What are its special things